Proctor's World
Hello World.  It has been nearly two months since my last And on the 4th Day... (more about this later) and a lot has been going on in Proctor's World.  Here are some pictures and context:
In late April, Laura, my parents and I ran up to Detroit for one of the best days of my life.  It started with a Tiger's victory at Comerica in which we were joined by more family (Andy and Cindy down from Petoskey) and culminated with Springsteen at the Palace of Auburn Hills.  Springsteen put on a hell of a show, we had custom shirts and I made an ass of myself afterwards in what will forever be known in my family as the "close your trunk" incident.  I can now cross seeing Springsteen with my wife and parents off of my bucket list.

We were in Michigan again this past weekend to see some family and celebrate Laura's sister Sarah's law school graduation.  Prior to Sunday's graduation ceremony we spent Saturday hitting up Founder's and New Holland brew pubs with other family (Josh, Megan & Co.).  Sunday we waited patiently and cheered loudly as Sarah crossed the finish line and then went to Gilbert & Blake's for an excellent celebratory dinner.  I had the Lobster Ravioli, highly recommended.

Seeing Sarah as well as friends Roy and Taylor graduate from law school has me excited for my upcoming law school journey.  Congratulations guys and I know you all will kill the bar.

While all of our comings and goings are fun, it should be noted that we are still having a hoot here in Louisville.

Weight Watchers Update:  I have been maintaining for the most part the past couple of months.  22 LBs down to date.

Our World
With election season heating up we will hear a lot about what is going to change, what is going to stay the same, what our values are and what are values should be.  With this in mind, I have decided to list a few thoughts on what I would like to see come to fruition in terms of legislation in my city, state and country.  Some may seem more important than others and readers may very well disagree with some.  I would appreciate some high-brow feedback in the comments section, either agreeing or disagreeing.

1.  Gay Marriage-  Why is this a debate anymore?  Two consenting adults should be able to get married regardless of their sexuality.  Can we please stop this ridiculous "debate" and allow all Americans this most basic right?  There are real problems in this country and gay marriage is not one of them.  The only problem are these cruel amendments that are stomping on American's rights.  Twenty years from now when we have come to our senses and this is a non-issue we are going to look back and say "what in the hell was that?"

2.  Beer on Sundays-  I want to be at least one beer in by 1 PM kickoff on NFL Sundays.  I do not know why there is a law banning liquor sales until 1 PM on Sundays, but I know I want it repealed.  If it has something to do with church I will happily bring my bulletin to BW3s as some sort of pass to get a damn beer in my hands!

3.  Beer on Election Day- I voted and now I want to start the results party!  Is there really a problem with people getting drunk instead of voting? And if there is, are we really sure these are crucial votes in the election process?  Sell beer on election day!

4.  Golden Parachutes-  Think about your job and what happens if you screw up really bad.  If you are a math teacher and none of your students learn math because you spend the entire class talking about your sex life you would be fired.  Would you be given a large sum of money to leave?  I work at a bank, if someone comes in for a equity loan and I loan them 200k on a property worth 50k I would get fired and maybe sent to jail.  I would not be given my salary for the next three years as some sort of goodbye gift.  I am sick of company's laying off employees to fix the CEO's fuck-up and then turning around and giving said CEO millions to just get the hell out.  I am not sure how to legislate against this but I want it legislated against.

Tool of the Week
Eric Proctor

That is right, your's truly finally takes home the prize.  How does someone take nearly two months off from their supposedly weekly blog?  Especially after the previous And on the 4th Day... said I would be back on schedule?  The truth is I am not sure how often I will be able to blog for awhile.  Proctor's Type is not going away, but I do not want to win this award ever again by guaranteeing posts that may not come.

Beer of the Week
Bell's Oberon 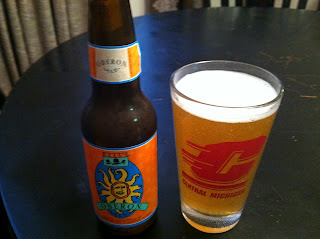 Summer in a bottle.  10/10.  Crisp, refreshing.  I look forward to it every year.  Please do not put an orange in it.  Released annually right around Opening Day.  Summer beer does not get better than this.  $10-$12 for a six pack.


Posted by Eric Proctor at 9:34 AM No comments: