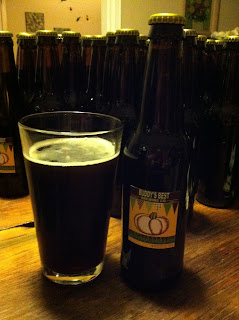 Who: Buddy's Best Brewing Co. (Louisville, KY)
What: Proctoberfest Wedding Ale
Cost: Production costs ran about $1 a bottle
Description:  Proctoberfest is a solid brown with an excellent head.  The pumpkin and brown sugar are evident in the front and it finishes strong with an almost champagne like tingle.  The 7.0 ABV means Proctoberfest has a decent kick but the drinker wouldn't guess it's that high.  From the lacing in the glass to the unique not-too-much pumpkin taste, this is not your average home brew.
Rating: 10/10
Social Standing:  If you are drinking Proctoberfest Wedding Ale that means you are at our wedding, which makes you a fantastic, well-balanced person. 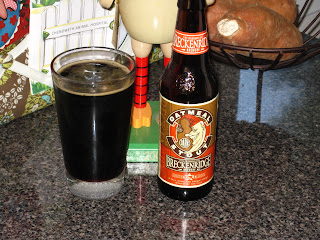 Who: Breckenridge Brewery(Denver, Colorado)
What: Oatmeal Stout
Cost: $9.29 for a six pack of 12 oz. bottles
Description:  This oatmeal stout has an up front bitterness that, despite being unexpected, was highly welcomed.    This must be where the 31 IBUs kick in.  Although I like the increased IBUs, there isn't a lot of ABV (4.95%) to support them.  This beer has nothing on the back end after the upfront bitterness.  The beer also felt thin for being a stout.
Rating: 6/10
Social Standing:  There is no problem bringing a beer like this to a party.  It is somewhat unique but not all out weird, more Pink than Lady Gaga.  I wasted most of my Colorado stereotypes on the previous Beer Reviews...August Beer Reviews 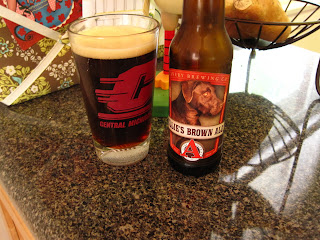 Who: Avery Brewing (Boulder, Colorado)
What: Ellie's Brown Ale
Cost: $9.99 for a six pack of 12 oz. bottles
Description:  I should preface by saying I love brown ales and I always tend to compare them to what I consider to be the style standards:  Bell's Best Brown Ale (appropriately named) and BBC's Nut Brown Ale.  Ellie's is very tasty but just average.  I think my love for Browns makes me like just about any Browns and Ellie is no different.  The ABV (5.5%) is spot on but I would like a little more bitterness (17 IBUs) balanced out with more roasted flavor.  The rating gets a bonus point for the Dog on the label.
Rating: 7/10
Social Standing:  Why do I keep reviewing Colorado beers?!?  Lets see....Boulder...ummm...college town...liberal...marijuana?....skiing?...clean air....Northface...ok I got it...
Hey Hippie, Ellie's Brown ale is a perfect beer to enjoy after your skiing trip, that is if you have a free hand from holding your marijuana cigarette and making a peace sign.  In between deep breaths of your amazing clean air, enjoy a few sips of this brown ale and as a bonus it also comes in a can which would fit perfectly inside your Northface fleece's interior pocket.
In all honesty, I REALLY want to go to Colorado...who's in?
Posted by Eric Proctor at 10:04 AM No comments:

*Disclaimer* I want to start this by saying that if you have never read my news and notes (great name) before,
I treat trivial matters as if they are the most important issues in our world.  I know there are serious issues out there like war, famine and the HPV vaccine.  News and notes is not serious, it is supposed to be humorous commentary.  I wish I did not have to say this, seeing that it is obvious to 99% of people.
Now....
For the sports fans out there, is there a bigger "who gives a shit?" sports "story" out there right now than whether Joe Paterno will be coaching from the sideline or the press box?  Seriously, no one fucking cares!  The mother-ship had the audacity to run this on the bottom line continuously for a few days.  Will there be flashing BREAKING NEWS when he goes to the bathroom to inform us whether it was a #1 or #2?  I don't dislike him, but I am sick of hearing about him.  I would rather see updates on an independent hockey league team's backup goalie's swollen left testicle.  This is just another example of the Big 10 stuck in the past, look at the SEC, Nick Saban could be coaching from the depths of hell (he might be) and no one would notice or care.
*RIDICULOUS COMMERCIAL ALERT*
I am going to describe a television commercial.  Please make a mental picture and then we will guess at the product it is endorsing.
There is a very well-dressed guy with a shaved head, a goatee and a soul patch (I later found out that this is the artist Pitbull) who is texting people from an IPhone about an impromptu party .  There are numerous attractive "cool" people using various means of transportation (Escalades, bicycles, tumbling) to reach a gathering underneath an overpass.  There is a large tour bus, sub woofers, and break dancing.  The accompanying music has a dance beat and the mind-blowing lyrics "Let's have a real good time" repeated over and over.
Now, what is this commercial advertising?  A Pitbull concert tour?  No, guess again.  Some type of expensive Cognac?  Good try, but wrong again.  Ray Ban sunglasses?...Condoms?  No...its Dr. Pepper..that's right, its Dr. Pepper.
Now I know what you are thinking, because I thought the exact same thing:  what the fuck does any of this stuff have to do with Dr. Pepper?  Unfortunately, I do not have the answer but I am able to provide a few more points of mockery to the absurdity of this commercial.
Everyone can be seen dancing and drinking a Dr. Pepper...ok, what next?  Everyone got dressed up, went to the "party" and enjoyed a can of Dr. Pepper.  So what happens after that first fifteen minutes?  Is more Dr. Pepper drank?  Do people begin to bong Dr. Pepper?  Is there medicine available to relieve the acid reflux that is brought about by binge drinking Dr. Pepper and dancing?
Here is the commercial, I could only find the Spanish version, but you get the point..
Advertisers and marketing people will tell me the ad is successful because I remember it.  They may be right, I kind of want a Dr. Pepper now, especially if it going to bring about the fun had in the video.  To be honest, this commercial is not nearly as bad as the McDonald's commercials where a large group of people are inside an apartment and there is a "party" going on where everyone is mingling and gorging themselves with various items from the McDonald's menu.  If I remember right some guy is upset because he was somehow left out of the McDonald's "party".  I cannot fathom why he would be upset.  Is he afraid he will miss the inevitable gas that will be brought about by 30 people all eating McDonald's in a cramped space?
Posted by Eric Proctor at 10:52 AM No comments:

It has been three full months since my first installment of News and Notes (you have to love the name).  Today is a great day to catch my loyal readers up on what has happened in those three months and to state my opinion on vibrant topics from around the world (part 2).  I will start with a few personal notes, considering this is one of the most exciting times of my life:
-The Detroit Tigers are your AL Central champs!  Leyland has his team red-hot and rolling into the post season and I cannot wait until the MLB playoffs.  My personal (biased) opinion is to give Verlander the Cy Young, Papa Grande the Rolaids relief award, and either Miguel Cabrera or Verlander the MVP.
-Staying on the topic of sports, today is the University of Louisville vs. University of Kentucky football game.  I am an avid Cardinals fan but I am also realistic.  I like our chances but I am not going to guarantee anything, this team is young and will have to really show out to walk out of Commonwealth with a W.  I should note that more than a few Kentucky fans have told me they don't think it will be close...as in Kentucky is going to to run away with it.  Well, Vegas disagrees, seeing as they have installed Kentucky as only a 5.5 point home favorite.  When I tell U of K fan this and offer them my bookie's phone number they tend to curb their expectations.  Personally, I will be DVRing the game because I will be throwing back some brews and doing the cupid shuffle at my boy Ian's Wedding.  Congrats Bro.  I am looking forward to it.-And speaking of weddings....I AM GETTING MARRIED IN TWO WEEKS!  -Months of preparation have culminated in me applying to a few law schools for admittance into the Fall 2012 cycle.  LSAT has been taken, Letters of Recommendation have been sent, transcripts uploaded and personal statement written.  So far I have applied to the law schools of The University of Cincinnati, The University of Kentucky and Valparaiso University.  Thankfully, these three schools all sent me application fee waivers so I saved about $150.  Now calm down Louisville friends, I still plan on applying to my first choice and most likely destination the University of Louisville Brandeis School of Law.  For whatever reason they do not accept applications until October 1st, and if you read the title of the blog you would know it is only September 17th.
What a great time to be alive!  I have so much to look forward too.  I am so blessed to have the friends and family I have, I love you all.

Posted by Eric Proctor at 9:45 AM No comments:

Today as I was walking Carl, I noticed two different men coming the opposite way from us.  One was driving a BMW sports car and the other was on foot wearing a flat-bill cap, long black denim shorts and Jordan's.  I try to wave or say hi to everyone I see while walking the dog.  Unfortunately in this situation I used stereotypes to try and predict their reactions.

I figured I would get a stare down from the sports car guy or that he might speed off and squeal his tires.  From flat-bill and Jordan's I expected he might scowl my way or ask me if I had a lighter.  Much to my surprise BMW gave me a polite raise-fingers-off-the-steering wheel wave and flat-bill a polite hello and head nod.  This made me start wondering; why can't all us guys treat one another this way?

Let's face it, it can be tough being a guy.  We have to deal with losing hair, fathering children, and strong emotions brought about by sport outcomes.  Maybe if we all just respected one another a little more we wouldn't have to worry as much about all the problems that men bring about such as war or street gangs.  This morning was a great example of some men, of different walks of life, just out respecting each other.  Men Out Respecting Each other or M.O.R.E for short is a movement I am going to start.  When I am out on the town I will not try to stare other dudes down or be so swift to judge my fellow men.  Who is with me?  I am certainly going to need M.O.R.E.
Posted by Eric Proctor at 8:58 AM No comments: