I am not going to waste my time agreeing with everyone else that the referee situation in the NFL is a mess.  I will share a meme I made:
Ok another... 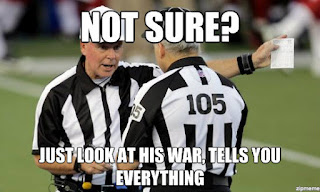 Here is what WAR is: http://en.wikipedia.org/wiki/Wins_above_replacement

See what I did there?  It is called a transition.  I am now going to make my extremely biased choice for the American League MVP and Cy Young.  You guessed it, Miggy should win the MVP (regardless of whether or not he wins the Triple Crown) and Justin Verlander should win the AL Cy Young.  I admit that Mike Trout is deserving of the award as well, but I am taking Miguel because WAR is a flawed statistic and should not supplant every other criteria for the award.  That would be like saying "instead of counting the entire electoral college for the election, we are just going to go whichever way Oregon goes, that seems like a cool state.  People treat WAR as if there was a parallel universe where this "replacement player" was put in every situation and AB that the player being compared to was a part of.  IT DOES NOT WORK THAT WAY.  If you like newer trendier statistics: Miguel has a better OPS and more Runs Created.  Trout steals more bases and plays better defense but he strikes out more and has cooled off down the stretch run.  Am I going to never watch baseball again if Trout wins?  Of course not.  Do I think Miguel deserves consideration for his phenomenal career to this point? No.  I think that if you look at this year in its entiety, throw out the sexy story lines and sexy statistics, then you will see that Miguel has been the Most Valuable Player in the MLB this year.

Now I will make my case for Justin Verlander...he has the highest WAR of every AL pitcher.  DUH.

My top 10 NFL teams right now regardless of record and not over-reacting to anything:

9.   Cincinnati Bengals- The defense needs to shore up but the offense looks fantastic

8.   Chicago Bears- Opposite of Bengals

7.   Pittsburgh Steelers- Big Ben playing like an MVP but defense has me SMDH

6.  Arizona Cardinals- The Good: Defense top 5 in NFL The Bad: Kevin Kolb starting QB The Ugly: John Skelton may create a QB controversy when he is healthy

5.  San Fransisco 49ers-  Runs, stops the run, great coach, but just an OK QB (keep in mind, do not over-react, he is still Alex Smith

4.  New England Patriots- BIAS ALERT by week 8 Hernandez will be back and defense will be top 10 in NFL, playing so much better.  D just has to learn to finish

3.  Green Bay Packers- Defense is much improved, something tells me A Rod will be ok

Posted by Eric Proctor at 10:43 AM No comments:

This is probably the 2nd best time of the year for sports (March Madness, Masters, Opening day being #1), baseball pennant chases are heating up, NFL and college football are up and running and my new "thing", the English Premier League, is the perfect Saturday morning warm-up.  With this in mind, I figured Proctor's Type will throw out a few "takes" on what is going on around the world.  I would like to fire up some civil debate as well as have something permanent that my readers and I can go back to and look how foolish I was.

Am I the only one who thought Wimbledon 2012 was Federer's last hurrah, that Nadal would unfortunately succumb to chronic knee injuries and that Djokovic would dominate men's tennis for a long, long time?  Enter Andy Murray.  I know, Andy Murray is a name that had been hanging around the party but he was stuck in the corner talking to the annoying drunk guy.  Well get Andy a martini and open up the VIP room, Novak is there and the party has grown by one.  Yesterday on twitter (@proctorstype) I proclaimed that Djokovic was undoubtedly going to come back and win.  He did not, and now Andy Murray has a grand slam to go with his gold medal.  I still think Djokovic has men's tennis in his grasp but that grip has loosened a tad.

Is there a more ridiculous dichotomy than sports media proclaiming that everyone will over-react to Week One and then the same talking heads insanely over-reacting to Week One in the National Football League?  If an alien came to Earth and listened to ESPN radio the past few days, he would learn the following things about the NFL:

The five best Quarterbacks in the NFL are 1. RGIII (alien would assume this is his proper name) 2. Joe Flacco 3. Tony Romo 4. Peyton Manning and 5. Mark Sanchez.

The Saints, Steelers, Packers, Giants and Eagles all suck.

A 49ers v. Ravens Superbowl is a given.

The Jets are actually good and are now the class of the AFC East.  (Being a Patriots fan, I love that this is the story)

2/3 of the NFL starting QBs are "elite".  Alien would look up definition of elite and not understand this, just like everyone else.

3)  Alabama looks unstoppable.  They will most likely coast to an undefeated BCS championship.  They may be even better than their last few years.  Blah, blah, blah.  One thing they could not do is BEAT AN NFL team.  The Browns would beat them.  The Vikings would blow them out.  The notion that any NCAA team could beat any professional team (NFL, NBA, MLB, NHL) is ridiculous.  Seriously, it is bullshit fodder that is something stupid drunk people rant about that but do not understand.  The Bobcats would have beat UK by 20 points last year.  If you gave the Astros metal bats they would run rule Arizona.  And whoever won the Frozen Four would get their ass kicked by whoever won the Stanley Cup.

I think people do not realize that professional athletes are the best of the best AND they get bigger, faster, stronger and more skilled after they become professionals.  Not every player from Alabama signs to play in the NFL.  If they were better than the Browns players wouldn't the Browns cut their roster and sign all of the undrafted Alabama players?

Posted by Eric Proctor at 8:44 AM No comments: