The Anatomy of a Beer: Part Two

When I last blogged (Link) I spoke of Proctoberfest and how it will be created.  Due to scheduling restraints (work, can't wait until I'm done doing that), I was not able to attend the brew day.  Luckily, Buddy (master brewer) documented the occasion in great detail and sent me a blog-like email including pictures.  Now, in what can only be described as one of the laziest, most half-assed moments in the history of Proctor's Type, I am simply going to copy and paste the entirety of Buddy's email (with his permission of course).  I will go ahead and interject myself by commenting in italics throughout the blog and captioning the pictures:

Brew Day Update:
On July 26th, at approximately 12:37 pm, Proctoberfest began its gallant genesis (solid alliteration to start).  The final slightly revised grain bill consisted of: 20 pounds of 6-row pale malt, 1 pound of 40 lovibond crystal malt, 1 pound roasted barley, 8 pounds Munich malt, and half a pound of special B malt.  The grains were ground, cupped into permeable grain socks, and then placed into the mash tun.   Because of the large amount of under-modified grains that we decided upon for Proctoberfest, it was necessary to implement a four step mash (duh).  "Step mashing elevates the amino acid level of the wort [only in high-adjunct beers/beers lacking well-modified barley will amino acid deficiency be a problem], a factor important to yeast nutrition.  Step-mashing also lends greater colloidal stability (less haze potential) when using higher protein malts such as six-row" (Snyder).  The first step in our Proctoberfest mash was the protein rest, which involved heating 9 gallons of water to 130*F, which was then poured into the mash tun with the grains (I always thought "Protein Rest" was when someone was fatigued at the gym and drank a protein shake to look cool).  The infusion of the grain with the water brought down the overall temp to a perfect 122*F, the target number for a protein rest.  At this temperature, the proteins are broken down from long strains into smaller and smaller more manageable strains.  Because I had never used pumpkin before, I didn't add it to the protein rest until the fifteen minute mark...I don't know why this decision was made.  Call it brewers intuition. (Buddy needs his own blog)

The protein rest lasted thirty minutes and I finished at least a beer and a half by the time the next step was necessary(dammit! I hate missing Brew Day).  To get to our next heat stage, I heated 4.5 more gallons of water to boiling and then added this water to the mash tun bringing the temperature up to 149*F (insert predictable joke about the recent heat wave).  We were shooting for 150*F, but 149 is pretty for the win(amen).  This rest is called the sacccharification rest and lasted 60 minutes.  The "sacc rest" breaks down the starches in the grain into sugar, which can then be eaten by yeast to produce alcohol.  This is an important step, and worthy of a few more beers while waiting for it to finish.  At the end of the sacc rest, you can check to make sure your starches have been converted by sampling a small amount of wort on a plate and dripping iodine into it.  If it turns blue, this means starches are not fully converted yet (take that Kentucky Fans!).  If the color stays brown, it's time to mash out, our third step.


Mashing out requires transferring all that worty goodness and grain bags back into the brew pot, bringing the temperature up to 170*F (at this temperature you destroy the starch degrading enzymes you created in the sacc rest that did all that important starch conversion work for you...what a shit life for the enzymes!(although this sounds like something I would write, notice it is not in italics)), and allowing to rest for ten minutes at this temp.  At this stage, Proctoberfest was well on its way to becoming a dream come true.  The smell was sweet and malty, with a strong waft of pumpkin that added a creamy depth to the color and viscosity of our wort (that's what she said?).  The pumpkin added more color than I imagined it would, which may result in a darker amber color than is desired, but color is negligible if the taste is right.

In the fourth and final step, we get to sparge.  Time for another homebrew to quench one's thirst.  The grain and wort are transferred back into the once mash tun, now lauter tun, and the grain bags are cut open to form an even layer of grain on the bottom of the lauter tun.  By setting up a simple gravity system, we then slowly pour 168*F water(Coor's Light uses 33*F water during this step) over the grain bed drawing out all of the sugars we created in our earlier steps.  Our setup is high tech enough to have a fly sparge that rotates inside of the closed lauter tun allowing all grain to get its equal share of sparge liquor without having to constantly open the tun (sparge liquor is just a term that means the hot water that is drained over the grain bed).  From the lauter tun, on the bottom of the grain bed we have a braided hose encased in a DIY perforated piece of PVC connected to a ball valve that will drain all the sugary wort back into our brew kettle.
After the sparge was finished, we ended up with 17&3/4 gallons of wort.  Because of the long and vigorous boil that comes next, this was a perfect level to start out with (perfection FTW), as you will usually lose roughly two gallons to steam over the 60 minutes of boiling.  Better grab another beer to prepare for all that steam.(I cannot wait until the day I get a chance to say this)
Once the wort of Proctoberfest hit a full on chubby boil, it was hop time(that's what she said).  One ounce each of fuggle and hallertau hops were added and the clock was set for 60 minutes(approx. one hour).  These first two ounces of hops are the bittering hops chosen for this beer.  As hops boil and break down, bitterness increases while simultaneously aromatics are lost.  To get the best of both worlds, an additional ounce of each was added at the thirty minute mark.  The resulting Proctoberfest final product will have both the bitter that we want as well as aromatics.  At fifteen minutes left in the boil, we are reminded that this is a pumpkin beer, and thus, is in need of some extra flavors.  Two whole vanilla beans cured in bourbon, three whole nutmeg nuggs, 4 ounces of crystallized ginger, and two cinnamon sticks are added for the final fifteen minutes of the boil to infuse subtle spice and added complexity of flavor to Proctoberfest (I am really excited about this).
After sixty minutes of boiling is up, Proctoberfest gets one final dose of hops (an ounce of each) that will come through primarily in the bouqet of the beer with only a couple IBUs added to the final tally of 29.  There were some hiccups at this point, there always are, when it was time to chill the wort.  The plate chiller had no suction at all, and Proctoberfest ended up in the bath tub with ice water to bring down the temp(picture your last life-threatening fever) .  This was the only amateur moment in an otherwise extremely successful brew day.  Yeast is pitched, airlocks are clicking, and fermentation is under way.  Proctoberfest will be an epic FTW beer without any question.
Once again, a major thanks to Buddy for not only creating Proctoberfest but also writing an excellent (funny and detailed) description of its Brew Day.  I cannot wait to sample and blog about the final product.  My last thought is this:  does anyone else think the term "master brewer" I have been using sounds like "masturbater", and therefore isn't it really funny?
Posted by Eric Proctor at 8:58 PM No comments:

My Wedding and the Anatomy of a Beer: Part One

From cookouts to homosexuality to high school reunions, Proctor's Type has covered a wide range of timely, important topics from around the world.  Unfortunately, one very meaningful subject has been neglected to this point: my upcoming wedding!  This will come as bitter-sweet news to the legions of young (and old), single women who did not know me prior to reading my blog.  I know it is upsetting that I will not be on the market, but at least you can borrow my great wedding idea(s?) in the instance you do ever find someone (maybe not the best way to phrase it).
Besides being beautiful, my future wife (pictured) is also very creative and artistic.  This presents something of a road-block as to what decisions I am qualified to make in terms of the wedding planning.  I never wanted to be absent from the planning and I have helped to some degree, however my goal was to think of something significant and unique that would leave its mark on this most important of days.  Should we play the Law and Order music during the service?  Should we tape a $100 bill under one of the pews for a lucky attendee?  I considered everything from Mexican food to planting a tree but nothing seemed to stick.

I had almost given up when I had what can only be described as a once-in-a-lifetime stroke of genius...beer.  That's right... beer.  BEER!  BEER!  It finally made sense:  BEER!  How did I miss it?  Our Wedding is called Proctoberfest for God's sake.  Of course we were planning on having beer at the reception... but we need special beer!  We need a beer that will represent our eternal love (whatever that means).  We need to make a beer that is for us and us alone: we need Proctoberfest and we need to serve it at our reception.
There is only one problem:  I have no idea how to make beer.  I have seen my dad make beer and have had a few homebrews but I need a "master-brewer" who understands the importance of this beer.  I need a friend who is willing to dedicate many hours of his life and use of his equipment to make Proctoberfest.  Lucky for me, I have just the guy, and he just so happens to be in my wedding party.
Buddy needed to try his suit on anyway and we agreed to have a Saturday afternoon beer planning session. He brought over some books and "samples" and we were on our way. 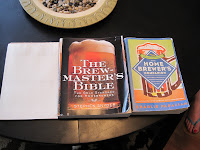 Buddy asked Laura and I about what flavors we wanted as well as how much alcohol we wanted it to have (I picked a 6.66 abv becuase I thought it would be "scary").  We selected the hops, the malts, the yeast and even the adjuncts.  We entered numbers into a computer program and Buddy plugged away on a calculator.  To say that making a unique beer is complicated would be akin to saying that the Wonder Years was an "ok" television show.  At one point we considered stopping and solving the nation's debt crisis. 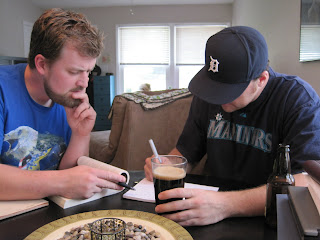 After 8 beers and a couple hours we had a recipe and half a buzz:  not a bad way to spend the afternoon.  (Also, I know many of you are wondering...his suit fit.)
Proctoberfest is now planned and its time to start the manufacturing process.  Part II of the anatomy of a beer will be after we purchase all of the supplies and prepare for brew day which I am considering "Live Blogging" (once I figure out what that is and how to do it).
Posted by Eric Proctor at 9:41 PM 2 comments: