One of the more polarizing figures in modern music is Pink.  Some view her as just another run-of-the-mill pop music act who is more style than substance.  I, on the other hand, believe her to be an uber-talented musician who represents independence and the importance of loving yourself. 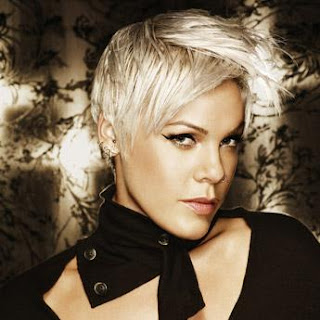 I believe even Pink's biggest detractors would concede that she has been outrageously successful commercially.  That same group would most likely admit that she has a resonating, powerful voice that cannot be denied.  The differences in opinion arise from her music's substance and style, as well as her personal aesthetic and "act", so to speak.  Is Pink a phony-tough fake who sings absurd songs about partying and being a bad ass?  Or, is she a genuine talent who speaks for those who all-too-often do not speak for themselves?  I believe she is the latter.

"Her hair makes her look like a boy!"  "What is she wearing?"  "I do not think she should be singing about getting drunk and cursing is her music, she is supposed to be a role model for young girls!"  Sound familiar?  Shouldn't we have our daughters just listen to Taylor Swift (no offense, love her too) sing a song about crying after a boy broke her heart?  Women should not tell guys to eff off, right?  Let's tone down the noise about actual emotions and focus more on our looks and manners.

Wait a second, public displeasure with Pink sounds a lot like a 1950's black and white short about "how to be a lady".  Get the fuck out of here, this is MUSIC we are talking about.  All of the anti-establishment ideas we embrace about punk rock are frowned upon when coming from Pink.  Rappers routinely rap about partying, going to the club and treating women like shit.  Why is that okay for them, but when Pink says go to the club, party and have respect for yourself people lose their mind?

Maybe it is just that we group Pink in with other pop acts who just skim the surface and turn out manufactured "love" songs hit after hit.  If that is the case, we need to remove her from that group and recognize her as a rock music artist who has carried "pop punk" for the last decade.  Pink goes deeper than standard-issue, modern day "oh, you're sexy, I'm sexy too, let's hook up" bullshit that dominates the pop charts.  This mantra does not represent how 99% of music listeners actually live their lives.  We are routinely called ugly, fat, and stupid by the world around us. We fall in love with people who do not love us back.  We have bad days, we say things we do not mean, and we do things we are not proud of.  This is the real world, and Pink's music represents this.

Now, it should be noted than I love a well written song as much as the next guy and the substance of Pink's lyrics have been a frequent subject of scorn from her foes.  Yes, "so what?, I'm a rock star, I've got my rock moves and I don't want you tonight" is not going to lead Spin Magazine guy (more about him here) to wax poetic about Pink changing his life.  On the other hand, "you're so mean, when you talk, about yourself, you are wrong, change the voices in your head, make them like you instead" has assuredly made a bullied, hurting teenager see themselves in a better light.  I believe sometimes it is better to speak simply from the heart than intricately from somewhere else.

In conclusion, I doubt that non-fans who read this are going to run out and buy Pink's catalog.  I am not trying to imply that everyone should like Pink's music, only that they reconsider what it is they believe her music stands for.  With bullying and self hate becoming a national crisis, it is refreshing to see someone not only denounce the bullies, but tell them to go to hell as well.


Posted by Eric Proctor at 9:34 AM No comments: