Over the past few months I have been slowly but surely reading/studying C.S. Lewis's "Mere Christianity".  This week I was surprised to read that he believes forgiveness, even more so than chastity, to be "the most unpopular of Christian virtues".  After reading his explanation and contemplating the subject in my own mind, I have to agree.  Forgiveness is without a doubt more often preached than practiced, either by Christians or non-Christians, in modern-day society.

Honestly, forgiveness is hard, it feels like work.  It feels like giving in.  From my Christian point of view I sometimes find myself thinking: if God has forgiven us all in Christ, why must we forgive one another (a modern take on the Lord's prayer)?  It seems that these days forgiveness is frowned upon and a sign of weakness.  Could you imagine what Nancy Grace would have said about someone who forgave Casey Anthony?  What if an Environmentalist forgave BP?  What if Eric Proctor forgave Mike Vick? 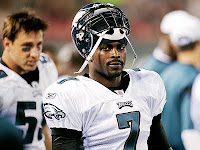 I am not the biggest fan of Mike Vick, in fact, I am not a fan at all.  Although I find him to be a phenomenal, once-in-a-lifetime athletic specimen, I also find him to be a deplorable human being.  In my opinion he should have went to prison for longer than he did.  I find it difficult to believe how so many fans cheer for him, knowing what he did off of the field.

Last NFL season I spent hours arguing with my friends (and the television) about whether or not it was ok to cheer for Mike Vick and celebrate his accomplishments.  Some thought he was an American redemption story, some were happy because he was on their fantasy team and some were able to separate his on the field doings from his prior off the field doings.  I wouldn't hear any of it.  He killed dogs!  Remember that?!?  Just thinking back to last year and remembering all the praise he received makes me cringe.  It feels so good being on my non-forgiving high horse!  Why must I come down?

Some of those some friends I was arguing asked me why I wouldn't forgive Mike Vick, seeing as that is the Christian thing to do.  Naturally, instead of actually considering what they asked, I took it as a personal attack and either avoided the question or stated that his actions were unforgivable and continued arguing.  I didn't see his attempts to change as genuine or "enough", therefore he wasn't worthy of forgiveness.  Too bad that's not how forgiveness works.  Even now that I do see his positive works in the community and his attempts to help prevent dog fighting, I can't use those as justification for forgiving him.  Forgiveness isn't merit based, I just need to forgive him and I will.  Michael Vick, I forgive you.

I wish I could say that was easy and a weight has been lifted off my shoulders, but that's not the case.  I can say that I know forgiveness is what God wants from us and that the act of forgiving makes me feel closer to him.  And before you ask: no, you will not see me in a Vick jersey this year or any year, its still all about Mr. Thomas Brady and the Patriot way.  Now, seeing that this is Proctor's Type and there needs to be some ridiculous crap thrown in...

While I am in forgiveness mode, I am going to go ahead and cross another off the list...
I fucking hate ketchup.  I hate its looks, its smell, its texture, the sound it makes being squeezed out of a bottle, and of course its gross taste.  With all of my five senses, I loathe ketchup.  Did you know that putrid smell coming from a park's trash can in the middle of summer is mainly caused by old ketchup?  Ketchup has stained my clothes.  Ketchup has ruined fries I was supposed to be sharing with someone.  I think I may have even slipped on a ketchup pack once.  I am not even going to think anymore about it.  I am just going to do it:
Ketchup, you are forgiven.
Wooh...Mike Vick and Ketchup both forgiven in one blog entry.  I think that is all I can manage tonight.  Green beans, Nic Cage and Southern Indiana will have to be dealt with at a later date.

Posted by Eric Proctor at 10:31 PM No comments:

As I have said before, Proctor's Type is about anything and everything.  Its not just about movies, beer, sports, or gardening.  We all know that blog's about narrow subject matter are doomed to failure (look no further than the Huffington Post, or college athletic's recruiting blogs).  With this in mind, I am always looking for new subject matter and this entry is no different.

While enjoying a pleasant Saturday off from work, my fiance and I decided to purchase a "mix six" of beer at the local party store.  As we were looking through the various choices Laura asked if I had sampled one of the beers before.  I replied that I had, because I remembered the name and label, but that I did not remember if it was good or not.  I have had hundreds of different beers in my life, but lately have become frustrated with not having properly cataloged them, either on paper or in my mind.  Hmmmmm...

Most beer reviews seem to focus on the aroma, color, feel (huh?) and taste of the beer and then proceed to give the beer a numeric rating or letter grade.  I am going to mix it up by describing the beer's type, who makes it, what it cost, a general description, a rating (1-10) and most importantly the beer's place in the world and what it says about the drinker .  Without further ado, the first installment of Proctor's Type beer reviews: 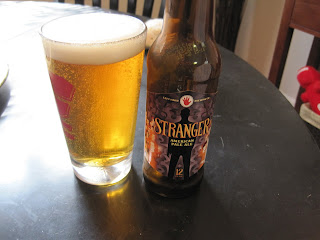 Who: Left Handed Brewing Company (Longmont, CO)
What: Stranger American Pale Ale
Cost: 1.79 for a single 12 oz. bottle
Description:  This beer justifies its name as a Stranger.  It is different from your typical APA in terms of being less hoppy (36 IBU) and having a rather low ABV (5.0).  There really isn't anything special in terms of taste.  This beer would be the equivalent of meeting a stranger who seems cool at first but then starts standing too close to you and creeping you out.
Rating: 5/10
Social Standing:  Throw on a tan T and some Eddie Bauer jeans, get in your Subaru and grab a 6 pack of Stranger.  You are drinking beer from Colorado now!  Plus you can always make a lame joke about whether or not you can drink it with your right hand. 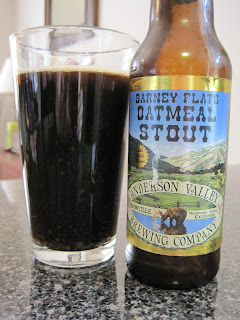 Who: Anderson Valley Brewing Company (Mendocino, CA)
What: Barney Flat's Oatmeal Stout
Cost: 1.99 for a single 12 oz. bottle
Description:  Legit.  This dude is thick, dark and delicious (first time I have typed that sentence in at least a couple of weeks).  At first Laura was a little freaked by some sediment floating around but after one taste we agreed this was the beer of the day.  ABV is a mild 5.7% with 13 IBUs.
Rating:9/10
Social Standing:  Dear Guinness, GTFOH.  I'm a real Stout and am drank by real men.
Sincerely,
Barney Flatt's Oatmeal Stout 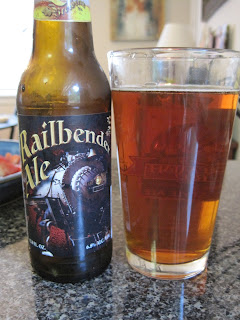 Who: Erie Brewing (Erie, PA)
What: Railbender Ale
Cost: 1.79 for a single 12 oz. bottle
Description:  This is a Scottish style ale with some serious kick (6.8% ABV).  Although I have never been a big fan of the genre, I can say this is one of the better Scottish style ales I have had.  There wasn't a really strong  alcohol taste and the hops were low (26 IBU) which is normal.  This was the last beer I drank and it went down quick and smooth.
Rating:7/10
Social Standing:  I had never had or heard of Erie Brewing company prior to having this.  Buying this can either make you look like a true beer connoisseur or a jackass who bought it to look special at a party. Honestly, I really liked the name Railbender because it reminded me of the year I spent hopping trains. 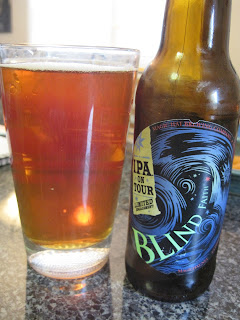 Who: Magic Hat Brewing Company(Burlington, Vermont)
What: Blind Faith IPA
Cost: 1.79 for a single 12 oz. bottle
Description:  I was hesitant to purchase a beer made by Magic Hat considering my intense hatred for number 9.  This IPA is part of their "IPA on tour" campaign in which they feature a new IPA every month.  Needless to say, my faith has been restored in Magic Hat.  In general, IPAs are my favorite type of beer and I was hoping this one made the grade.  Unfortunately this IPA lacked some of the intense aroma and flavor I have grown to love.  The beer isn't bad though, it just isn't special.  Typical IPA stats (6.2% ABV, 60 IBU)
Rating:6/10
Social Standing:  I cannot wait for a 19 year old sorority sister Magic Hat number 9 drinker to drink this.  Oh look, its Magic Hat!  Cool!"  Next thing you know, her perfect life will be turned upside down!  hahahahahahahaha Not what you were expecting was it?!?  hahahahahahahahaha 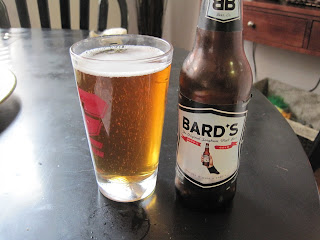 Who: Bard's(New York)
What: Gold
Cost: 2.49 for a single 12 oz. bottle
Description:  This beer is apparently "Gluten Free", whatever that means.  I must be a fan of Gluten because this beer sucks!  Plus it was the most expensive of the 6 pack, which pisses me off even more. I cannot describe how terrible it is.  I guess the next time I see a beer described as "The Original Sorghum Malt beer", I will know to stay away.  This trick didn't even work: 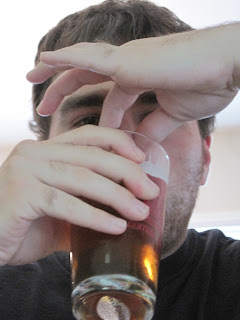 Rating:1/10
Social Standing:  If you are a leader of a gluten-free or sorghum movement you could invite your friends and family over for a poker night called "Bard's and Cards".  Just don't expect many people to show up. 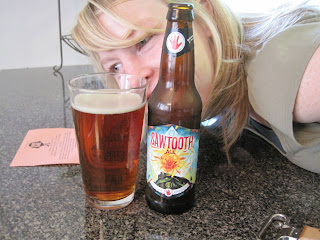 Who: Left Handed Brewing Company (Longmont, CO)
What: Sawtooth Ale
Cost:: 1.79 for a single 12 oz. bottle
Description:  Laura really liked this one (check the picture).  LHBC calls this ESB their flagship brew and with good reason.  This beer is a beautiful amber color and has an exceptional bitter but not too bitter flavor.  This would be a great beer to drink if you were planning on the 6-8 beer total.  Also the label art was done by someone but I instantly dismissed the name from my brain and haven't bothered to go back and check.
Rating:8/10
Social Standing:  Drinking Sawtooth is very different than drinking the Stranger (as described above).  By drinking the LHBC's flagship beer you are saying to the world that you are beer savvy but not too adventurous.  You know what you like and you don't really need to try much else.  You also love missionary sex and plain glazed doughnuts.
Posted by Eric Proctor at 9:26 PM No comments: