A Call to Action

Dear Readers,
Above is a link to the FBI's ten most wanted fugitives.  These guys need to be caught, and today I am asking you, a reader of Proctor's Type, to help.  Learn the faces of these low-lifes, read about their crimes and check your social circles to see if you have been unknowingly spending time with a fugitive.  HINT:  they may be using an alias!

I know Proctor's Type is, for the most part, a light-hearted, entertaining read but today we are going to discuss the scum of the Earth.  This is a list of thieves, murderers and perverts!  Have I ever told you how much I dislike criminals?  And to think these are some of the worst of the worst, still on the run and enjoying their freedom.  HINT #2:  Do not assume they are dead!  Murderers Fisher and Brown are known to have wilderness survival skills.  Pedophile Toth uses "charm" and intellect to enter a vast array of social circles.  Murderer Godwin has escaped from jail twice.  Theives Mogelivich and Gerena could very well be in their native countries (taking a vacation soon?).  Drug dealing murderers Ravelo and Saenz are most likely traveleing between Mexico and the United States southwest.

These dregs of society are all in which leads me to HINT #3:  upon seeing a fugitive please consider them armed and extremely dangerous.  Men with nothing to lose tend to behave wildly, off the cuff so to speak.  Do not become their next victim.  If you suspect you have found a fugitive, please contact your local FBI office or law enforcement agency.  I do not want you to contact me personally until you have contacted the police or FBI.  I do not have the capabilities to apprehend a fugitive.  Please contact me afterward so I can share your success with all of my other readers.  I will dedicate an entire entry to your heroism and diligence.

I do not think one apprehension resulting from a reader sometime in the next three months is too much to ask for.

P.S.  I want to give a special message to the pervert and newest entry to the list:  Eric Toth.  I do not like that we share the same first name and I do not like that you think it is ok to engage in production and distribution of child pornography.  I travel the midwest frequently to visit family and I will have my eyes peeled for you.

And on the 4th Day...(européenne nouvelles)

Hello everyone, I am aware this is my first blog entry in a month.  Life became very busy prepping for the honeymoon and very enjoyable while on the honeymoon.  And on the 4th Day... is back and can be expected weekly.  Thank you for reading and as always please "like" my Facebook page (Here) and share with your friends.

Proctor's World
Speaking of honeymoon, we are back and truly had what can only be described as a trip of a lifetime.  Let us rewind a little...
In October of 2009 I proposed to Laura, she said yes and we were soon discussing our honeymoon plans.  That is right, Laura was more excited about planning our honeymoon than the wedding itself.  She asked if we could go to Paris, I suggested London as well and the wheels were set in motion for a post-marriage European excursion.  From that point wedding planning took over and we were fortunate enough to have a beautiful wedding (Our Wedding) on October 1st 2011.

We planned our honeymoon to be around six months after our wedding.  After a decision not to use a travel agent, we needed ample time to plan and save funds as well.  All in all we settled on five nights in London, four nights in Paris and finally three more nights in London.  We booked our flights, renewed our Passports, secured our hotels and all of the sudden off we were...


From the onset it seemed like everything lined up in our favor.  For example, we spent two weeks of late March in London and Paris and did not see one single drop of rain.  Our Welch friends were able to meet us for dinner and the Lion King in London.  Our flights, trains, subway trips, buses etc. were all safe and for the most part very timely.  We did not get pick-pocketed or lose anything.  All of the unfortunate things that can happen to travelers avoided us and for that I know we are extremely blessed.  From this point I could rattle off our itinerary and post all of our 1500 pictures but I would rather let the photographs and stories trickle out over time.  Our honeymoon will be something I remember and discuss forever.


Our World
Prior to traveling, especially internationally, one receives various tips, what-to-dos, and things to avoid.  Sorting through what is sound advice, what is bullshit and what is based on fictional television programming can be difficult and tiresome.  With this in mind I figured we would use hindsight and play a little over-rated/under-rated regarding Europe travel advice.

Over-Rated
"Parisians are rude/hate Americans"
I can honestly say that I did not run into any of this during my time in Paris.  Sure French speaking people prefer a "Bonjour" to a "Hey", but that does not mean they are being rude.  The same people who are offended by French people wanting to speak French are the same ones who would be incensed if a Hispanic person approached them and began speaking Spanish.  They are the same people who spend hours complaining that there is a Spanish option on automated telephone menus.  Speaking English is not some sort of rite of passage in the world.  In fact, if someone does give you the courtesy of speaking English to you when it is not their primary language, you should thank them.

Also, I call bullshit on Parisians hating Americans as some sort of general rule.  Again those who are spouting this off are hypocrites whom for whatever reason do not like the French.  I am sure there are some Parisians who do not like Americans, but from what I saw they are few and far between.  Parisians are proud of their beautiful city and enjoy tourists from all around the world coming to enjoy it.  So as long as you arrive in Paris and do not order freedom fries or tell the cafe owner they are lucky you are there because O'Reilly ended his French boycott you will be well received.
Appropriately-Rated

"London/Paris is expensive"
This, for the most part, is true.  As a very general rule of thumb, I realized prices in London and Paris are comparable to what they would be in American dollars, so you lose out on the exchange rate.  The further you get away from tourist attractions the more reasonable the prices become.  One way to save some serious money is to avoid pricey restaurants and eat at British Pubs and French Cafes.  The quality of the food is excellent and the beer/wine selection and pricing is superior.  Below is what Laura and I voted as the best meal we had, a lunch consisting of Duck skewers and Rosemary potatoes, wine and Laura's ratatouille.  It ran us about 40 Euro (service and tax are included in menu price): 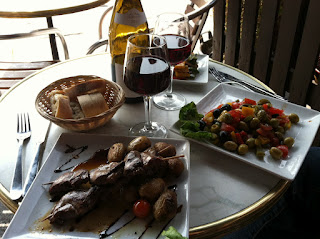 Under-Rated
"Make sure you have a pair of comfortable shoes"
We walked a lot.  A conservative estimate of our daily walking would be 6-8 miles.  Luckily, we were prepared.  I purchased a pair of Clark's and Laura rocked some Merrell's, both of which are considered to be on the Mount Rushmore of shoe companies that combine comfort and style.

Sports
I know I said Sports would no longer be a section of And on the 4th Day... but I wanted to give some quick props to my University of Louisville Cardinal's who won the Big East tournament and made a sensational Final 4 run.  And although I cannot bring myself to cheer for them, I would like to congratulate the U of K Wildcats on bringing the championship back to Kentucky and reminding everyone that our state is the Mecca of college basketball.

Boys and girls this is the best time of year for sports with March Madness wrapping up, the Master's about to tee off, MLB opening day and the NFL draft looming.  Enjoy it.

Tool of the Week
The inconsiderate photo-taker
Five Seconds.  If I am walking into the path of your photo, I will stop for five seconds and allow you to take your picture.  If you think you are Ansel Adams and want to get the lighting just right and adjust the spectrum or whatever goes into it, you are going to have to deal with people walking into your photo.  I like taking pictures as well and I know how frustrating it can be when someone knowingly steps into the line of your picture.  This is why I instituted the five second rule.  Now, for those of you wondering, yes, both five second rules can be combined  If you drop food on the ground and are about to walk into someone's picture, you are allotted ten seconds.

Much worse than the long photo taker is the the person who asks you to take a picture of them and then wants to review it.  I am ok if you want to make sure you did not blink but you are allowed a brief glance review of the photo.  I volunteered to take the photo, I am not a hired hand!  It would be different if you offered me five Euros to take a perfect photo and I agree, thereby entering into some type of verbal contract. Also, if I take a picture of you and your wife, you cannot appear baffled if I ask for the same fucking courtesy.

Beer of the Week
Young's Bitter (from the cask) 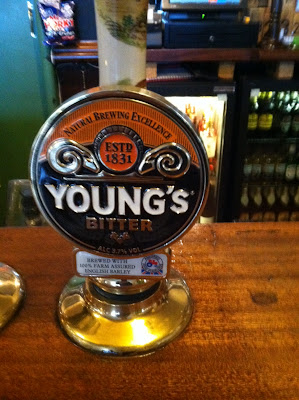 I could not get enough of the cask-conditioned beer selection within those fabulous English pubs.  It was hard to pick a favorite but I went with the popular Young's Bitter.  It only takes one sip to realize that the higher temperature of the beer is perfectly balanced with the slight bitterness of the ale.  These beers are lower ABV than one would think but you better watch out because the go down easily as well.  I cannot fathom why more American bars do not have some casks mixed in.

Posted by Eric Proctor at 8:11 AM No comments: