Can you recall a time when you discovered something or someone you knew was going to be the real deal?  It is pretty special to be "first" on something like that, especially if whatever (or whomever) you discover was unknown by your friends and family at the time.  Hipsters claim to do this all of the time, but they frequently leave out the two most important parts and discover things that are 1) terrible and 2) never become popular.  I know, I know, the Frankfurter Petticoats has a really interesting arrangement consisting of 2 trumpets and a xylophone, but somehow they didn't catch on with the mainstream music fan. 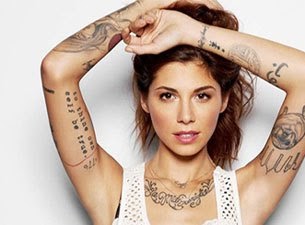 Anyway, I am not going to say I "discovered" Christina Perri, I am sure her parents and elementary school music teacher knew of her talent before I did.  But I will say I was one of the very first to see something special.  One day about 10 years ago, I was listening to a relatively obscure radio station here in Louisville (102.3 "The Max") and heard a song called "Arms" by Christina Perri.  I felt the generic drama and pain resonate through her powerful voice.  Soon after, I did some serious digging on YouTube and unearthed the "A Thousand Years" video, which was apparently on the soundtrack to a B vampire movie.  Not only did she have the voice, but she had an edgy look too, like my girl Sara Bareilles with tats!  Right at that moment, I told anyone that would listen "This Perri is going to be the real deal sooner rather than later."  If you don't believe me, I bet my mom saved the voice mail.

Now here we are today and Christina Perri has passed up both Madonna and Beyonce as the highest selling female musical artist of all time.  I am not going to rub it in your face and say "I told you so", but I will ask that the next time I randomly send you a music video or recommend a special condiment that you remember that I sometimes have an eye for these types of things.  I leave you with CP's latest smash "Human", it is a deep video, but if you pay really close attention you will notice she starts as some type of machine and becomes "human" towards the end.  It is something to see: