The Five Greatest Athletes I Have Ever Seen In Person

As this blog grows and evolves, readers will realize I love lists/rankings and sports.  With this in mind, here is the first of many:

While walking the dog this morning, I started thinking about my upcoming trip to Indianapolis.  Laura, Sam and I are going to see the super team that is the Miami Heat (side note: the Pacers are playing as well).  Although I am not necessarily a huge fan of the Heat (I like the Lakers and Pacers), I cannot wait to see LeBron James play basketball in person. Dwayne Wade and Chris Bosh are just icing on the cake.  LeBron is 6'8" 260, fast, quick, strong, a phenomenal leaper and defender.  I may not say hes my favorite player, but I can say I respect his never-before-seen ability and marvel at his game.


With this in mind I began thinking about who the best athletes I have ever seen in person are.  Its an interesting thing for sports fans to think about, especially if you live in a city with no professional sports teams like I do.  For us going and seeing a major four (NBA, MLB, NFL, NHL) professional sporting event is a trip and a special occasion.   Before we get started a couple of rules about this list:


1. Seeing someone play at an amateur level does not count.  I have been to COUNTLESS U of L sporting events and have seen D Wade (Marquette), Angel McCoughtry, Elvis Dumervil etc.  These games, although highly entertaining, are not the highest level of competition and will not count towards this list.


2.  I have to have been old enough/ sober enough to really remember the event.


3.  Horse racing does not count.  I do love the horses and jockeys though.


So here is the list, ranking them was hard, especially across sports, but I think I have it nailed down: 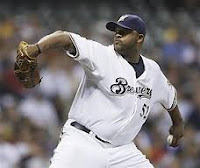 Laura and I went up to Cincinnati to catch the Red's last home series of 2008.  It was a special weekend considering we got to see CC pitch and won a cruise of fan appreciation day.
Going into this game, the Brewers were making a late push for the playoffs and had basically "rented" CC from Cleveland for the second half of the season.  CC was a BEAST, it seemed like he was winning every game down the stretch, all the while pitching on short rest.   He didn't disappoint,  going deep into the game and winning yet again for the Brewers.  I am in the "CC will one day be a Hall of Famer" camp, which makes seeing him pitch even more special. 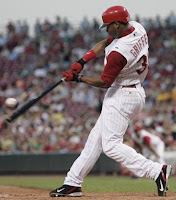 I have seen Griffey a few times, all with Cincy.  I can't recall one single game or play that I saw him make.  I can tell you definitively that his swing is even sweeter in person.  Its almost like an optical illusion in that the ball is obviously going fast but his swing looks so controlled, almost as if it were in slow motion.  I cannot put into words how cool it would have been to see him in the Seattle days when he was 100% healthy and his defense was just as special as the offense.  An obvious first ballot Hall of Famer, Griffey was fun to watch in multiple viewings.

Back in 2002, the same year the All Star game was called a tie, I was on a mission trip with my at-the-time girlfriend's church.  We were in the twin cities working with impoverished kids.  One day after our work was done, the youth minister told us that we could go to a baseball game for fairly cheap.  Being an avid baseball fa myself, I jumped at the opportunity.  However, to the more casual fan, the idea of going to see the twins play in the Metrodome wasn't as appealing.  That all changed when we found out who the opponent was: the Texas Rangers.  A Rod stopped through Texas for a couple years prior to signing with the Yankees.  I cant even remember who won (I think the twins), but I did see A Rod homer.  Despite all of the controversy surrounding him now, I still positively look back on seeing one of the greatest players of my generation blast a pitch over the Metrodome's center field fence, all the while playing for a last place team.

Last summer Laura and I did a tour of Michigan as our summer vacation.  While planning this vacation, we checked the Tiger's schedule.  Seeing Seattle listed as playing in Detroit while we were near there changed my "wanting to go to a baseball game" to "having to see Ichiro".  I have now adopted the Tiger's as my AL team, but I have to admit, I was more excited about seeing Ichiro than anything else.


We went with our great friends Lindsay and Ryan and had a blast.  If you ever get to see Ichiro, DO NOT MISS BATTING PRACTICE.  The stories about Ichiro in batting practice are not urban legends, he hits pitch after pitch about 10 feet over the right field fence.  I have no doubt he could hold his own in the HR derby, all the while not hitting a ball over 380 feet.  During the game, he went 2 for 5 and threw out a runner going for second.  Just another day at the office for Ichiro, but a very special experience for myself.

Those of you who know anything about me know this:  I am a Tom Brady guy .  That doesn't mean I don't respect the hell out of Peyton Manning.  So when my friend Derek told me he had Falcons vs. Colts tickets, I knew I had to go.  It took us six hours to drive to Indy in the snow (it normally takes two) but I would do it again in a heartbeat.  Keep in mind this was back before Vick went to prison and we all found out what a piece of crap he is.  Manning vs. Vick...


This is still the only NFL game I have ever been to but it was awesome!  The QB battle didn't live up to the hype though, Vick played terrible while Peyton had one of his perfect passer rating days.  Manning is a machine and I can say I have seen one of the greatest ever.  Now I just need to see him again in Lucas Oil...


So theres the list...  an interesting side note is that I haven't seen the majority of my personal favorite players play.  The next five I have to see (considering I am seeing LeBron) are 1. Tom Brady 2. Derek Jeter 3. Kobe Bryant 4.  Tiger Woods and 5. Miguel Cabrera (he missed the game we went to last summer)  I'll consider this some type of short term "Bucket List".
Posted by Eric Proctor at 12:15 PM