Within a minute of LeBron making his "decision", I made a decision myself to see the "big three" (LeBron, Wade, and Bosh) asap.  Laura and I found out that the Heat would be in Indianapolis to play the Pacers on February 15th.  The plans were set in motion and then it was merely a waiting game.  Laura found herself, Sam and I tickets in the upper section of Conseco Field house and price-lined the downtown Indianapolis Marriott for $55. 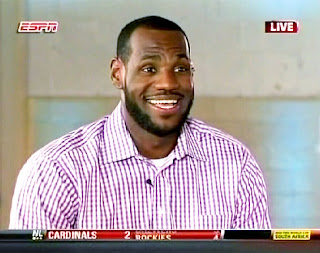 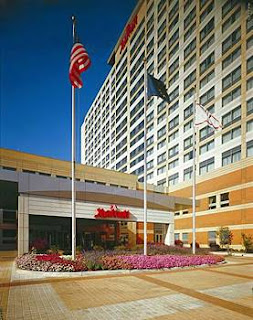 Sam, Laura and myself jumped in the Jeep yesterday morning at 10 am.  No trip up North 65 could be complete without a stop at the Edinburgh outlet malls.  Luckily it was a Tuesday and we didn't have to worry about the weekend outlet mall types (just kidding).  One hundred and fifteen bucks got me a Polo® button up "blake" shirt, two pairs of Izod® pants (it should be noted that these pants have a sun protection factor of 50), and a pair of Jordan® brand basketball shorts.

It was good, standard roadhouse fair.  I had a burger.
We arrived at the Marriott and self parking cost only...28 dollars.  The hotel is splendid: big and clean with plenty of knowledgeable staff.  Serious props to all of my readers who work for the Marriott.
Quick note:  In the middle of the Marriott lobby there is some iced water with fruit floating in it.  Don't make the mistake of asking any questions to the guest services about this...everyone will think you're an idiot.
After looking at a downtown Indy map with numbers and dots, we set our sights on a "lil' Irish Pub" called
Calddagh's.  We walked the scenic route and finally found our destination, with a FTW "$3 Pints" sign out front.  To put it bluntly: this place is the real deal.  They have about 15 beers on tap with some seasonal selections.  Personally, I enjoyed a couple Upland Schwartz, a strongbow (i know..) and a Smithwick's.  At the server's recommendation I ordered their Corned Beef and Cabbage Rolls appetizer.  From their menu: corned beef, cabbage, potatoes & monterey jack cheese in a wonton, served with sweet chili & thousand island dipping sauces. 6.99 .  These bad boys are absolutely delicious and the one appetizer was enough for us three to share and get a nice pre-game snack. 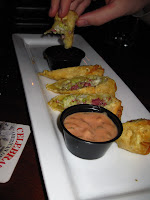 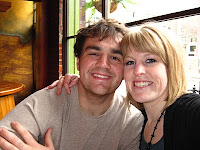 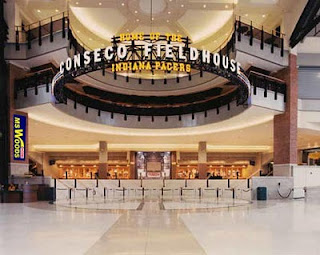 Around six it was time to head to the game.  After a five minute walk, we had arrived to the game.  Conseco is a beautiful facility (just ask Sam).  Prior to the game, I bought a Danny Granger Jersey T-Shirt ($22).  We headed to our seats which were high up but not behind a basket (which I hate).  I would say our section was about 50/50 Pacers to Heat fans.  The most popular jersey worn was D Wade, followed by LBJ, Granger and Reggie Miller.

G- Collison        G- Chalmers
G- Dunleavy      G- Wade
F- Granger         F- James
F- McRoberts    F- Bosh
C- Hibbert         C- Ilgaukus
One event we definitely wanted to chronicle was LeBron's chalk throw ritual.  Laura, expecting this to take place in the center of the scorer's table, thought she had missed it.  However, the video below actually caught LeBron throwing the chalk up.  Look in the upper right hand corner...
Seeing players the caliber of LeBron James and Dwayne Wade in person was an experience I will never forget.  Dwayne Wade went for 22 in the the first quarter!  He finished with 41.  LeBron got 27 and Bosh scored 22.  The Big Three lived up to the billing, accounting for 90 of the Heat 110 points.  As for my Pacer's, they played hard.  They fought back from a 22 point deficit and actually took the lead mid-way through the fourth quarter.  I was very impressed with the play of Tyler Hansbrough off the bench.  The Pacer's are a solid, growing, young team and will get in the playoffs if they continue to play well.
Honestly, even though I was cheering for the Pacer's, this trip was more about seeing the Heat and some of the amazing plays they can make.  Including this::
Lebron's tweet:  KingJames LeBron James
Great win for us tonight in Indy! @dwadeofficial went Ham tonight and probably threw the best pass in NBA history. Check it out
The game was everything I was hoping for (minus a Pacer's win) and afterwards we headed to Scotty's Brewhouse for some post-game food and beverage. 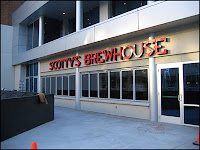 The last couple of times I was in Indy I wanted to check out Scotty's and never got the chance.  Its in a great location and has 40 plus beers on tap.  Overall, I would say our experience there was very hit and miss.  The beer selection was great but they didn't run their normal Tuesdays specials because there was a Pacer's game (smh).  The bar food choices were expansive but slightly over-priced.  Laura's burger came out cold and my chicken sandwich was just "OK".  I think we would have had a better time had the service had been more prompt and consistent.  We also weren't informed when it was last call...a major no-no with me.  I'm going to charge this experience to the game and give Scotty's another chance down the road.  One great thing, they have Old Rasputin on tap, I enjoyed a 23 oz. for $7.25.
We walked back to our rooms, and after a Bailey's nightcap, we hit the hay. The next morning, after a brief gym trip and a shower, we packed up and headed out.  Having seen a Pacer's game two years in a row, I can say we are definitely going to make this an annual thing.
Posted by Eric Proctor at 9:26 PM