It was less than a month ago that I was typing "King of" into the Youtube search in an effort to listen to the classic Police hit "King of Pain".  On a whim I clicked on the auto-populated "King of Anything" by Sara Bareilles, thinking I had heard the song before.  After watching the video about twenty times, I was hooked and thought I had found a hot new musical act.  I was then informed by Laura that Sara Bareilles had been popular since 2007 and this was her 4th or 5th radio song....oops.  Laura also mentioned that she was a fan and concurred when I mentioned that "this Bareilles really knows what the fuck she's singing about".  A quick Google search showed that Sara Bareilles was playing in Covington on a Saturday night and the Reds were hosting the Pirates on Sunday with a one o'clock start....obviously this weekend had to happen.
Still a great song....
We needed a place to stay and after I was turned down for my Priceline bid twice I decided to Hotwire a Covington hotel for $70 and was pleasantly surprised to find we would be spending the night in the Covington Radisson, a unique, circular hotel you see right before you cross the bridge if driving 71N to Cincinnati.  I bought the open seating tickets for $24 apiece plus Ticketmaster's ridiculous $10 charge.  Honestly, I would feel better about paying that charge if Ticketmaster just called it a "bullshit fee" and let me know right up front that I was getting ripped off.  Laura took care of the baseball tickets and Stubhubbed some excellent seats (pictures to follow) for $35 apiece.  If we only get to go to a couple Major League games a year, we definitely want some legit seating.
Laura traveled back from Fort Wayne Saturday morning and we quickly packed and jumped in the Jeep for the 90 mile shoot up to Cincy.  We talked most of the way and decided not to listen to music. (editors note: is this sentence really necessary?)  Upon arrival we double-checked that we would be on the side of the hotel that faces the Cincinnati sky-line and not the interstate.  After dropping our luggage in the room, we headed to Kelly's, the sports bar inside of the hotel, for some grub, brews and to watch the Pacer's blow a 10 point lead in the last three minutes and lose to the Bulls (smh).  Kelly's was standard hotel sports bar fare with one huge exception:  Laura's burger was without a doubt a top 5 all time burger.  We each had a few beers and along with half of Laura's burger, I had some Nachos.  Our bill was around $40 with tip, pretty reasonable for a hotel bar.
With the concert a few hours away, we headed to the Speedway to get some energy drinks and snacks we would need for the late night after-party.  We chilled in the room and enjoyed the view for an hour or two and hiked to Gold Star Chili for some economical Cheese Coneys.  Outside of the restaurant I snapped this picture and sent it to Facebook with caption:
Little did I know that this would spark the greatest Facebook debate since Farmville vs. Mafia Wars.  Gold Star vs. Skyline cheese coneys is as heated of a debate as Democrats vs. Republicans, Kobe vs. LeBron and Acai Berry vs. Green Tea extract.  I almost had to take the photo down after one friend, whom for their safety shall remain nameless, commented that Gold Star was "too meaty".  This is one battle I am going to stay out of, other than to say I was very satisfied with the Gold Star coneys and will undoubtedly return for more in the very near future.

We were now gassed up and ready to roll.  We had the hotel shuttle drop us at Madison Theatre where we lined up around 645 to get a good spot when the doors opened at 7.  We were probably two of the first couple hundred people to walk in and posted up in a standing area (all open seating) with a rail that also functioned as a drink holder.  The show started at 8 with the first opening act: Ximena Sarinana.  Ximena's songs were pretty good and I thought it was cool it was just her, a keyboard and a laptop with a drum machine.  She sang a couple of songs in Spanish, which were difficult to understand.  The next opener was Elizabeth and the Catapult and their music was as unique as their name.  A couple of cool songs but probably nothing I'll ever hear again.  It should be noted that around the beginning of their set I began downing Woodchucks, which made me fit right in considering I was in a room filled with 15-22 year old girls.
After a well timed bathroom trip, I grabbed a few more 'chucks from the bar and set up shop for Bareilles. She came out with the band and started a fun, light-hearted show.  The highlights included an audience-involved "King of Anything", a beautiful "Gravity" and an awesome rendition on Mumford and Son's "Little Lion Man".  Sara's show (first name basis now) is a lot of fun and she doesn't take herself too seriously.  the standing room was perfect for her style of show and I would definitely like to see her play again.  I told Laura that Sara throws her panties into the crowd after every show, not true.
After the concert we stopped by a place called Geezil Pete's.  It turns out this was a brand new place who was going through a "trial run" before their grand opening.  The odds of this place actually having their liquor license was about 15-1.  Nonetheless, we had a few drinks and some great conversation.  Northern Kentucky is a very under-rated place to people watch.  We walked back to the hotel and settled in for the night.  Laura fell asleep and I sat on the balcony in my underwear drinking wine and enjoying this view: 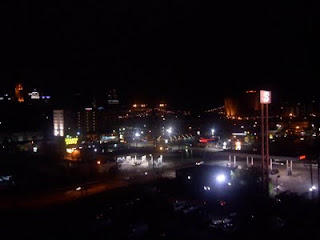 To say I was a little bit giggly the next morning would be an understatement.  The following video will pretty much explain what we did up until the baseball game:
We collected ourselves and drove across the river to beautiful Great American Ballpark.  Although I am not a fan of either team, I would never pass up the opportunity to see a big league game on a beautiful Sunday afternoon.  The Red lost but everyone in attendance still had a great time, the weather was perfect and it was a great back and forth game.  The beginning of the game was very interesting.  The Pirates first two hitters hit opposite field home runs on the first two pitches of the game.  I have never seen that before.  Plus I think Edison Volquez may have pitched the first inning underhanded, something else I have never seen before.
A legit weekend.