Proctor's World
I often use this section to keep my reader's posted on going-ons within the Proctor family.  This week I am going to look into my ever-evolving relationship with our youngest cat Ichiro.  Ichiro has begun to sleep on my feet every night and has started seeking more petting attention.  Obviously I enjoy the new found closeness with my feline daughter but it makes me wonder what brought it about.
Could it be she has finally forgiven me for dropping her feminine name "Olivia" in favor of "Ichiro" (one of my favorite baseball players) upon her adoption?  Maybe she has seen all of the benefits Carl receives for being in our face all the time.  It could even be something as simple as I have been doing a better job of cleaning the litter box.  Whatever the reason, the affection is appreciated...most of the time.

Sure, it is comforting that Ichiro sleeps by my feet but why does this six pound cat feel three times her weight after 10 PM?  How is she so adept at keeping her balance while avoiding my gentle kicks when I want to stretch my legs?  She is also relentless in that the rare occasion she does fall or jump off of the bed she pops right back up, talk about overstaying your welcome!  And why when I pause petting her does she hit me with the "wet nose" in an effort to resume?  I imagine Ichiro now feels on equal footing with her siblings Carl and Bagheera seeing that she now gets everything she wants as well.

Our World
I love Pandora radio.  I have been told that I am a tad behind the times with my recent infatuation with Pandora, apparently Pandora began in 2010 or something.  With this in mind I ask that you forgive my next few questions if the answers are obvious:
What is the algorithm  for what songs Pandora plays and when it decides to play them?  I think that sometimes I am giving Pandora too much credit.  Sometimes I find myself thinking that Pandora somehow listens to certain words or notes of music or something and matches them to my mind and soul.  Then the pessimist in me says that if you like a certain Artist or song it plays songs by artists it considers similar.  But how do they determine what is similar?  Is it based on other users thumbs ups or a generic list?  UGH so many questions and so few answers.  Pandora feels like the JFK assassination.

Has anyone else noticed that Pandora plays music in segments?  I will get Peter Gabriel, the Police, Heart etc. for a 6-7 song stretch then it goes to the singer-songwriter where I have to skip a bunch of Ben Harper songs.  For some reason even though I never officially liked Neil Young, OneRepublic (or is it 1republik, I do not know, some shit like that) or Norah Jones, they come on ALL THE TIME!  Then I go and Thumbs Up one Silver Creek song and I get bluegrass hour every session.  Also, what is Keane, is that a band or a singer?  I am sure some of Pandora's developers are reading this blog, please fill me in on what in the hell is going on here.


Sports
We are nearly to the halfway point of this abbreviated NBA season.  Let us take a look at Proctor's 5 most important things to watch for in the 2nd half heading towards the playoffs:

5.  Are the Pacers for Real?
Ok, so maybe this is not the 5th most important thing to watch for concerning the average NBA fan but this is my blog so here we go.  As I type this my Pacers are mired in a 5 game losing streak and have been playing terribly.  All is not lost but the Pacers playoff seeding has been affected and their defenses lapses are astounding.  I think getting George Hill and Danny Granger back to full strength will help but the most important thing is getting Psycho T's confidence back so that he can get back to being a huge energy/rebounding force off of the bench.  Starting tonight the next 6 games are lowly New Jersey, even worse Charlotte, New Orleans (I will be at this one), @ Charlotte, Golden State, @New Orleans.  How about a 6 winner to erase this ugly 5 loser?

4.  Durant/Westbrook
The young, uber-talented Thunder have the best record in the West and a never ending saga of whether or not Kevin Durant and Russell Westbrook can win an NBA championship together.  They are both all NBA talents and have a solid supporting cast, but who gets that all important last shot?  Can they play off of each other when the playoff level defenses clamp down and they cannot alternate isolation plays?  OKC is on the brim but I do not see a championship until this situation is closer to being resolved.

3.  Will the Lakers make a move?
If the playoffs began today the Lakers would be the 5 seed in the West going against the defending champion Mavs who swept them  out of the playoffs last year.  To say this is concerning would be quite an understatement.  So what is wrong?  Bynum is healthy and playing great, Kobe is still Kobe and Pau Gasol is 80% Pau Gasol so the pieces still seem to be in place.  D Fish is a great leader and a serviceable player in spurts but I believe his days as a championship level starting NBA PG are over.   Let us not forget the Lakers had Chris Paul but...well do not even get me started on that....

Here are a few moves that I believe would put the Lakers right back in championship contention THIS year:
Steve Nash-  The Lakers trading picks to Phoenix for Steve Nash would help both teams immensely.  Phoenix is being selfish with Nash and he has too much pride to demand a trade so there he sits with the vultures circling.  Part of the Laker's problem is that Bynum and Gasol do not get enough shots, Steve Nash could immediately fix that problem.

Rajon Rondo-  Despite Boston's recent success I do not think anyone really believes they can compete for a championship at this point.  They have also shown a reluctance (for some reason) to build around Rondo, maybe they would rather build around Bynum?  Bynum for Rondo helps both teams and puts the Lakers in a better spot if they were to get through the West wherein they would most likely be playing the Heat.  Guarding D Wade and LeBron is impossible but having Rondo and Kobe playing perimeter defense would certainly help.

Dwight Howard-  Bynum and two first rounders for Dwight Howard.  Win, win, the Magic have building blocks as opposed to nothing when Howard walks and the Lake Show are Western Conference favorites.

2.  Linsanity
Jeremy Lin is not a flash in the pan and he has transformed the Knicks from big name pretenders into legitimate contenders.  I believe Carmelo when he says he will share the ball when he gets back from injury.  Part of the greatness with Linsanity is that NBA fans can just sit back, watch, and enjoy.  Despite ESPN's great attempts there is not deep analysis needed.  The only questions is what other potential stars are buried on someone's bench (Terrance Williams anyone?)?  If the playoffs started today the Knicks would be the 8 seed butting heads with the top-seeded Bulls.  How about J Lin up against D Rose?  Can you get anything better than that?

1.  Can anyone play with the Heat?
In the preseason I picked the Heat to beat the Mavs 4-1 to win the NBA championship.  The only tweaks I would make now (barring a major trade) would be changing the Mavs to the Clippers and the 4-1 to a sweep.  LeBron is having an all-time top 10 season and his greatness has never shined more.  I picked him for the NBA MVP and the Finals MVP and I am still confident he will win both.

Tool of the Week
Yahoo Commenters (99% of them)

If you ever start feeling too positive about our society please go to any Yahoo article and read the disgusting bile that is the comment section.  For every insightful, positive or decent comment there are 99 disgraceful, hateful and pathetic "comments".  What is wrong with these people?  Many say that people will say anything due to the anonymity of the internet.  If true, I find this more concerning than comforting, is this what people really think/feel?  I am going to throw out a few examples just from this week just to drive the Tool of the Week honor home:
In a ridiculous article about Jennifer Aniston proving she is not pregnant by displaying her solid abs in GQ, one commenter said "that is what having a personal chef and personal trainer will do for you".  Sure thing dumbass, I am sure the hours of daily exercise with the personal trainer and eating only the healthy meals prepared by the personal chef had nothing to do with it.  Merely having a personal trainer and chef are the ticket to being in great shape, just ask Oprah (not intended to be a dig at Oprah).
In an article about a man having a heart attack after eating a triple-bypass burger in Las Vegas some of the "hilarious" comments included "he should get his name on the wall" and "bet he got a diet coke with that".  What if that guy was one of the commenters father, brother or friend?  I doubt those comments would not have been as "funny" then.
In a absurd piece about some guy ordering an expensive Starbuck's drink and getting it free on his birthday a very astute user said "Starbuck's sucks, its just a coffee shop".  As to Starbuck's "sucking", that is your opinion and not backed by anything.  As to it being "just a coffee shop"...No shit!  What does this even mean?  It is an article about coffee being ordered from a coffee shop.  Does Starbuck's suck because it is just  a coffee shop?  What do you want it to be?  Can I say Mercedes Benz sucks because it is just an automobile manufacturer?
Beer of the Week
Boddington's 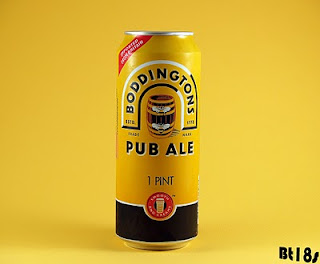 In my continuing noble pursuit of educating myself on British beer in anticipation for our upcoming European honeymoon... I drank some Boddington's this week.  I had never had Boddington's until a few weeks ago and now I cannot seem to get enough.  The creamy goodness goes down oh so easy and the widget makes the 16 oz. can the optimal choice.  Only 3.8% abv so make sure you get  a couple extra if you plan on partying.
Posted by Eric Proctor at 10:56 AM