In Defense of Peyton Siva

I cannot believe I feel the need to write a blog entry in defense of a amateur athlete who is being killed in local media and social media sites by adults who claim to be fans.  Am I defending him after he was caught with three teammates in a huge drug bust?  No, that happened to the TCU football team.  Am I defending him because he has been suspended for "conduct detrimental to the team" that we hear about so often?  No, by all accounts he is a great teammate and a good guy off of the court as well.

I am defending Peyton Siva because he made a couple of bad plays in a one point loss to the 2nd ranked team in the country.  Sure I was disappointed that we lost and in some of Peyton's decision making down the stretch, I am sure a lot of people are, none more so than Peyton himself.  The problem is not with being disappointed, the problem is with grownups singling out and tearing this young kid apart because they are disappointed the team lost the game.  These reactions are over the top, lack perspective and are oftentimes downright rude. 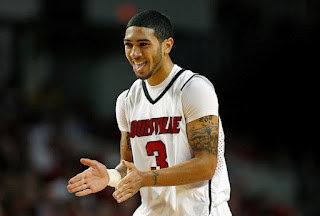 There is no better example of this than in the online Courier Journal.  Apparently there is a "guest blogger" on their payroll named Tom Heiser who writes about U of L sports.  He claims to be a "life-long fan" and he is wearing a red shirt in his picture so I guess he meets whatever criteria it takes.  Check out this excerpt from his otherwise boring, rambling "take"(here) on the Syracuse loss:

Needless to say, my antipathy toward Siva hasn’t abated — and probably won’t. If this were a pro team, he would be traded (or cut). It’s a shame that Pitino doesn’t have the muscle anymore to pressure guys into leaving with the shadow of limited playing time on the horizon as a new superstar waited to ink his name to a commitment. Unfortunately we’re stuck with Siva. We have to go to the dance with what we have. Doesn’t look like it will be too far. I feel no compunction in saying that Siva’s senior day can’t come too soon.

Wait a second, this guy is a fan?  So obviously he remembers how elated Cards fans were when we landed Siva and how often fans screamed to give him more playing time his freshman year.  Surely he has the perspective to think back to all of the games, a few of which were this season, that we would have lost without Siva on the court  Being a lifelong fan and a current guest blogger, he must be aware that Pitino says Siva is the nicest kid he has ever coached and an extremely hard worker.  I am positive he sees Peyton's faith and positive energy on display when he points skyward after every free throw, including the misses.  But I guess all of that does not matter in our ridiculous "what have you done for me lately" sports landscape.  We should "muscle out" guys after they have a bad game, to hell with their education or sportsmanship in general.  We simply cannot have guys running around out there, making bad plays, losing a few games and ruining our evening!
Do you see how ridiculous this sounds?  Unfortunately this unending complaining about the bad stuff and accepting positives as givens is the standard for fans now.  One day you love this guy you have never met and the next day he "sucks".  I say let us cheer for the Cardinals as hard as we possibly can in wins and losses, act like adults and insert a little perspective into our emotions after tough games.  This year we have a solid, competitive and improving team.  We should celebrate them, all of them.
Posted by Eric Proctor at 8:38 AM