Proctor's World
Three years in a row makes a tradition right?  Laura and I have caught a Pacers game the last couple of years and we decided it will now be a tradition.  So this past Tuesday I spent my fantasy football winnings on a "mental health break" for Laura and I.  I bought us some Pacers tickets and a room at the Courtyard in downtown Indy.  We drove up Tuesday afternoon, had a couple of drinks in the room and hailed a cab to the Rathskeller, a classic German beer hall in downtown Indianapolis.  After a good Samaritan saved us Taxi fare by dropping us at Banker's Life field house (formerly Conseco)  we enjoyed a very entertaining overtime victory over the New Orleans Hornets from our 8th row seats.  We strolled to Rock Bottom Brewery for a night cap then enjoyed a pleasant walk back to the hotel.  All in all a fun, safe, much-deserved night of laughs and unwinding.  Here are some pictures from the trip:
Quick Weight Watchers update: 2 pounds down, 14 total.

Our World
This week we play another edition of Over-Rated/Under-Rated/Right Where it should be. Recently I have had many requests for Proctor's Type to cover more Men's Fashion.  With this in mind I will rate some Men's shirt brands so my male readers do not go out on the town looking like a fool: 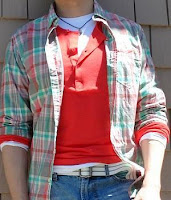 Ok guys, we are all becoming men now.  The last thing we need is to be caught wearing a shrinking, poorly designed, thin American Eagle shirt.  Even worse, American Eagle encourages its wearers to don 10-12 AE shirts at once.  It all starts with a faded T Shirt that says Eagle Ski Lodge or some shit on it, add a long sleeve thermal, a tight feminine polo shirt and a plaid long sleeve shirt and you are all set..to sweat and look like an idiot.  Watch an American Eagle commercial, the majority show late teen boys and girls running around in the desert wearing layers of multi-colored clothing.  Is this something you often do?
Appropriately Rated
Polo Ralph Lauren 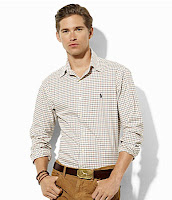 Whether you are going to Easter Dinner, to play polo or a frat party, you are going to be looking good in a Polo Ralph Lauren shirt.  Any time a man puts on a Polo Ralph Lauren shirt it says one of two things: either this guy got ripped off by paying $85 for a shirt at Macy's or he is a wannabe cheap ass who found a slightly irregular model at TJ Maxx.  Either way, it is Ralph Lauren and your false sense of superiority will more than off-set any inner questioning about whether or not you are wearing the appropriate shirt.
Under-Rated
Eddie Bauer

Educated
Determined
Daring
Intelligent
Essential
Balls
American
Unassuming
Earthy
Rational
Sports
If you do not play fantasy baseball skip this
Fantasy Baseball season is right around the corner and I am co-commissioner of the next great fantasy baseball league.  I called it How I Spend My Summer (do you like the name?) and it is our attempt at a dynasty league.  When you play a dynasty Fantasy Baseball league you have an initial draft and keep all of your players every year.  The only way to add players to your team is via free agency, your minor league players or a trade.  This is how Fantasy Baseball should be, like running a real team.  If it is August and you are out of it you may move a vet to a contender for a couple of prospects.  The league is locked and loaded.  If you are interested in playing, it is free and our only ask is that you stay active and do not auto-draft.  Let me know if you are interested, we need a few more.
Tool of the Week
Guy tailgating me on I65
On our way to Indianapolis I was driving 75 (speed limit 65) in the left hand lane.  All of the sudden I see a fast and the furious zoomer on my ass.  Before you ask, yes he was driving an Eclipse, yes he had a goatee, of course he had on Oakley's and I would estimate his age at 35.  Being a passive driver, I got over and let him pass.  I am sure it made his day when his barely street legal racing muffler roared and he blew by us accelerating to 80 or so.  He undoubtedly got a ticket within the next few minutes because we were in Indiana.  And if I had to bet, I would wager heavily that a copy of that ticket is framed next to the pink slips he has won in illegal street races.
Beer of the Week
Black and "Tan" (32 oz.) 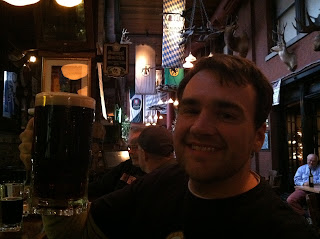 While visiting the Rathskeller in Indianapolis I ordered a Black and "Tan" consisting of Guinness and Rathskeller Amber (made by Indy brewery Sun King).  Of course I chose the 32 oz. "large" version and it was delicious.  Upon the recommendation of the bartender, I went with the Amber as opposed to a more traditional tan to go with the Guinness.  Somebody get that bartender a metal!  The combination of the two was smooth and really got the party going.