Quick title note, per my wife's suggestion, I will no longer have the date after And on the 4th day's title.

Faith and Family
This is the time of year when we all make our New Year's resolutions.  This is the year we lose weight, quit smoking, start bathing daily etc.  While these popular resolutions are noble and respected, I would like to recommend a resolution we could all stand to enact.  This year we should work on using more perspective and knowledge when it comes to discussions, arguments and other's opinions.  It has become all too common place to say something, someone or somewhere "sucks" based solely on our own ignorant biases.  If you do not believe me look through the comments section of a news story on almost any webpage.

This past week I was on a webpage forum discussing various law schools and asked some University of Kentucky applicants if they had also applied to the University of Louisville.  Another user quickly replied that they could not stand Louisville as a whole and could not imagine why anyone would want to live there.  They were telling perspective students bullshit about MY city.   I quickly became upset and thought "I bet they have not ever even been to Louisville, or at least not the "whole" city, plus they are from Lexington for God sake's".

Then came one of those no-fun moments of humility and self discovery.  I could have replied that it was in fact Lexington that sucks, that the city has no culture and reeks of horse crap.  Of course I do not know if any of those things are true (probably not), they were the product of my emotional, reactionary, biased thoughts.  I quickly determined that spewing mindless garbage about another's home was not going to help anyone decide what law school to attend.  My simple reply was to copy their gushing description of Lexington and paste it to my thoughts on Louisville (clever, huh?).

Whether its a city, religion, Tim Tebow or Eddie Bauer vs. Polo Ralph Lauren, constructive perspective and knowledge are much better tools to use for these debates.  So, if you are on the hunt for New Year's resolutions, consider this one.

Sports
Last Thursday night an all-time great collegiate football player played his last amateur game.  The sad part is most of us probably missed it.  We were done reading And on the 4th Day, comfortable in our favorite chair and probably decided to pass on the MAACO Las Vegas Bowl.  In the game a one loss Boise State team trounced a 6-6 Pac 12 opponent (Arizona State) 56-24.  Due to the ridiculous nature of the NCAA bowl system, the top 10 ranked Boise State squad was sent to Las Vegas to whip up on ASU while inferior teams will be playing in front of huge audiences and for millions of dollars in BCS games.

Boise State's Quarterback Kellen Moore finished his college career with a 50-3 record, that's right, in his four year college career he won FIFTY games and lost only three.  What does he have to show for it?  A 4th place finish in the 2010 Heisman Race and one BCS victory.  Despite Boise State's early season victories over powerhouses Oregon and Virginia Tech over the years, everyone just "knew" that Boise could not run with the big boys and that Kellen Moore was just a "system" QB.  So here we are, wondering what could have been with the winning-est college QB leading his team's defense of the Maaco Las Vegas bowl. 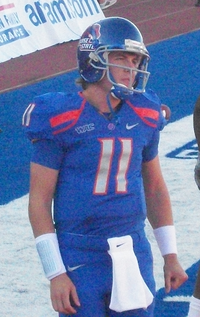 Our World
While Carl and I were on our morning walk, we came across a haunting sight.  There was an unwrapped (used?) condom on the sidewalk.  I would not have been so horrified if it was not something I had seen before.  Years ago, while living in my parents house, my friend Travis and I came across a huge pile of condoms off the side of the road.  What is with all these condoms on the ground?
Are people having sex on the sidewalk and simply discarding the used condom on the ground?  Is it displayed as some sort of unwelcome sign of victory like when a cat drags a disgusting carcass to the front porch?  Now do not get me wrong, I am all for safe sex but there is nothing safe about this situation.  Throwing a used condom on the ground exposes the general public to the spread of disease that the couple is trying to prevent!  The more I think about this, the more I think that I should have the Center for Diesase Control's (CDC for short) phone number programmed into my speed dial.  I am fairly certain that latex can exist a couple of hundred years before dissolving.  Who in their right mind is going to pick that thing up and throw it away?  It could easily stay where it is and run the risk of ruining life for generations to come.
Unfortunately, I do not have a solution for this epidemic.  My advice would be to always be looking down and explain to your children that throwing a condom on the ground is not OK and to never handle condoms found on the sidewalk.
Tool of the Week
Yorvit Torrealba 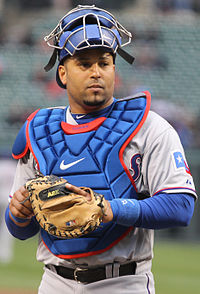 Who?!?  Exactly.  Only hard core baseball fans know who Yorvit Torrealba is and it should have stayed that way.  Unfortunately, Yorvit took it upon himself to slap an umpire at a VENEZUELAN WINTER LEAGUE GAME.  He was so enraged at an umpire during a VENEZUELAN WINTER LEAGUE GAME that he simply could not help himself and slapped him.  Get over yourself Yorvit Torrealba!  You are Yorvit Torrealba, you used to be known as a utility catcher with a decent pinch hit bat and a name that is hard to pronounce and spell.  Now you are known as an asshole, way to go.
Beer of the Week
Smithwick's 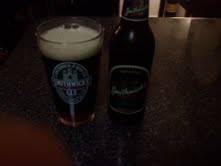 While we are reading things that are hard to pronounce, Smithwick's is the beer of the week.  A classic Irish Style ale, Smithwick's has excellent drink-ability balanced with a nice red flavor.  Also a great value, a six of Smithwick's costs about $8 and can be found almost anywhere beer is sold.  I know a lot of readers only do the Irish beer once a year, my recommendation is to mix this in the rotation throughout the year.
Posted by Eric Proctor at 10:41 AM