Proctor's World
I lost another 4.6 pounds bringing my total lost to 10.2 since I started Weight Watchers on January 2nd.  I am very happy with the program and with myself.  I have allowed myself to eat a couple not so healthy things and drank some beer, all the while losing some weight.  Tracking and being held accountable are by far the most important tasks in my weight loss journey and I have been fortunate enough to be married to someone who assists in both.  It is exciting to me that as I contemplate what is going on in my world the first thing that comes to mind is Weight Watchers and exercise.

Our World
We all know about "Eat This, Not That", a popular Men's Health article that has turned into a series of cookbooks and meal guides.  Eat this, not that helps readers make healthy decisions at restaurants and at home by showing which of two seemingly comparable food items are better for you.  Unfortunately this craze has created many ETNT amateurs.  I was recently reading a Yahoo article by some want-to-be ETNT "expert" in which I learned that eating a single plain Hamburger from McDonald's is better for you than eating a Quarter Pounder with cheese.  Really?  You mean to tell me that a much smaller portion of a greasy hamburger without cheese and mayonnaise  has less fat and fewer calories than its huge counterpart?  I think I may have already known this, oh yeah, that's because it is the most obvious thing in the world!  I think I will try my hand at Eat This, Not That...

At IHOP:
Eat This: 3 Pancakes
Not That:  All you can eat pancakes (>3)
Eating three pancakes versus gorging yourself on as many as you can swallow can save you an infinite amount of calories depending on how many pancakes you can eat beyond three.

At the Gas Station:
Drink This: Vitamin Water
Not That: Gasoline
If you opt for the vitamin water you will get the daily recommended amount of several important vitamins and elude the almost certain death that would come from drinking gasoline.


Sports
The Patriots are going to the Super Bowl!  The Tigers signed Prince!  WHHHHEEEEWWW!
This has been one of the best sports weeks in a long, long time.  Quick thoughts on both: 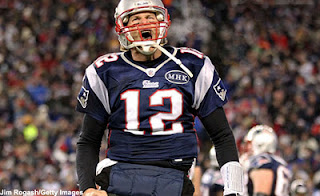 This year's Patriots team is the first in some time that I really did not think had a chance to go to the Super Bowl.  I thought the defense really was too weak and that the lack of a deep threat wide-out would come back to haunt them.  That goes to show how much I know!  This team's road to the Super Bowl was littered was injuries, doubt and question marks, but in the end Brady and Belichick's greatness shown through again (with help from stud TEs and a rag-tag defense).  Convincing myself that this season is still remarkable if they lose the big one has been difficult, but I think I have succeeded.  We will have to wait a couple weeks to get my Super Bowl reaction, but as of right now I could not be happier.  If the Patriots can avenge their loss to the Giants, I think this will be the greatest of all of their championships. 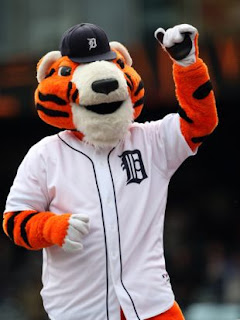 I could not find a picture of Prince Fielder holding up a jersey or anything so I put up this sweet picture of the Tiger's mascot.  If you read last week I wrote that Alfonso Soriano might help fill the hole in the lineup after V-Mart's injury...ALFONSO SORIANO, I was so desperate and grasping for anything.  I could never have imagined the Tigers would get Prince Fielder.  I am worried about Miggy moving to 3rd, but I will give him the benefit of the doubt when he says he is going to get in better shape.  The lineup could use a better on base guy on top, but I am splitting hairs now.  The thought of managers having to burn a righty and a lefty late in games to pitch to Miguel and Prince has me amped, MLB 2012 can not come soon enough.
Tool of the Week
Death Threat Guy
After Kyle Williams from the 49ers fumbled away a punt return that eventually allowed the Giants to win the NFC championship and go to the Super Bowl he received death threats.  Let us read that again...Kyle Williams, a professional football player, fumbled a football and received DEATH THREATS.  These threats did not come from teammates, coaches or anyone who was actually affected professionally from the 49ers  loss, they came from a "fan".
Basically, a cowardly loser was so upset that his favorite football team lost a football game that he felt it necessary to threaten the life of a player from a team he supposedly "loves".  I do not know where to begin with this: the over reaction?  the cowardice?  the audacity?  the pathetic life of the loser threatening?  I am very tired of hearing death threats.  Does Death Threat Guy anonymously threaten death in other meaningless scenarios?  If the Barista at Starbucks puts too much creamer in DTG's coffee does he think that act deserves a death telegram?  Is his first thought after having gas spill when returning the pump to its holster that someone needs to have their life in question?  In that scenario who gets the death threat: the manufacturer of the car or gas pump?  the attendant?  all of them?
In all seriousness DTG is a tool and one of these days the threat is going to lose its anonymity and DTG's ass is going to jail to spend time with guys who did a lot more than threaten.
Beer of the Week
BBC Kashmir Godzilla IPA

After all of the shakeup with the BBC brewers and a couple of recent visits I was concerned that my favorite local brewery was losing its touch.  All of that doubt was erased last night when I went to the St. Matthews location to watch the U of L game.  I had an excellent Cardinal Ale, which was a smooth red with a hint of sweetness.  Then I had the Kashmir Godzilla IPA which was a monster.  81 IBUs and around 8% abv is certainly worthy of a Godzilla moniker.  The immense hops were balanced with a sweet, almost fruity finish.  BBC is back! FTW
Posted by Eric Proctor at 10:42 AM