Faith and Family
As I wrote about in New Year's Resolutions(here), the weight loss journey has began for the Proctor family.  Laura and I attended our first Weight Watchers meeting this past Monday.  As someone who has gained and lost the same 25 or so pounds multiple times since college, I can say that this time really is going to be different.  The Weight Watchers plan seems to be the perfect combination of flexibility and accountability, allowing you to eat any food (as long as you count the points), but still having you hop on the scale at the meeting the next week.

I do not have any results to report as of yet, but I plan on using Proctor's Type to spread successes/struggles.  I am sure I have some readers who know what it is like to be overweight and just how difficult it can be to lose those pounds.  I welcome any tips from anyone and if I can help anyone stay motivated please let me know.  I suspect 2012 weight loss will present itself in this section for quite awhile, weight loss takes a lot of faith as well as help and support from family.

Sports
With the NFL regular season wrapped up, now is the time for predictions and MVP debate.  I considered not making any predictions on Proctor's Type because I am biased towards my Patriots and do not want to jinx them; however I might as well have some predictions out there in the off chance I am correct.  I will start with my wild card weekend selections and move on week to week from there.
Cincinnati 22 Houston 17
New Orleans 41 Detroit 31
Atlanta 28 New York 24
Pittsburgh 21 Denver 13

This years MVP race is one for the ages.  Two different quarterbacks (Brees, Brady) broke Dan Marino's single season passing yardage record.  Aaron Rodgers set the QB rating record.  Drew Brees broke the completion percentage and completions record.  Tom Brady led the team with the league's worst rated defense to a 13-3 record and the number one seed in the AFC.  Matt Stafford threw for over 5000 yards, many of those to Calvin Johnson who led the league in receiving yards despite being constantly double teamed.  Rob Gronkowski broke the all-time records for TD receptions and receiving yards by a TE as well as leading the league in TD receptions.  I have already named six guys without mentioning huge seasons form Ray Rice, Jordy Nelson or Maurice Jones Drew.  With all of this in mind, I am giving the Proctor's Type NFL award to.... 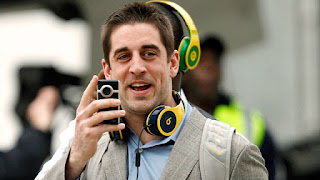 Aaron Rodgers completed 68.3% of his passes for 4643 yards and a TD/INT ratio of 45-6.  He also led his team to a 14-1 record (sat out last game) and was the most consistently dominate player in the NFL this year.  I do not buy into his season being downplayed due to his backup doing well, the same way I do not buy into Peyton Manning as MVP because his team did so shitty without him.  A solid case can be made for Drew Brees or my guy Brady, but in the end I looked at Rodgers lower interception total and made the call.  I know it's splitting hairs but it has been that kind of year.
Our World
This week we play a little game I like to call Over-Rated/Under-Rated/Right where it needs to be.  So many things in our world seem to be over-rated, under-rated or appropriately rated by the masses.  This week we look at bumper stickers/ car decals...
Over-Rated

I <3 my (dog breed)
If I see one more I <3 my Bichon Frise sticker on the back on a Mercedes Benz MLK320 SUV, I am going push my grocery cart directly into the driver's side door.  We get it, your taste in dogs is as sophisticated as your taste in cars, jewelry and swinging.  You probably spend more on dog grooming than the average American family does on groceries.  Unfortunately for you, you spent $3000 on a dog that isn't nearly as cool as Carl (here), whom we adopted for $150.
Under-Rated

Old Political Race Stickers
No matter what politician they support, it is refreshing to see a little piece of American history still clung to the back of a 1992 Mercury Cougar.  These stickers display wisdom and a desire to say "I was right!" and "I do not care if this faded bumper sticker makes my car look like shit!"
Right where they need to be

Calvin Pissing on Something
These are appropriately rated because they are not highly rated to begin with.  I know they are juvenile, redneck, and crude but at the same time you have to admit they are at least a little funny sometimes.  Plus if you see someone driving a certain brand of car with a sticker of Calvin pissing on that car brand it is hilarious.
Tool of the Week
Guy at the gym in jeans
We have all seen this guy before.  He shows up to the gym wearing blue jeans and he usually has a T Shirt tucked into them.  Often times he has a flat top and is wearing glasses.  No one knows why he has jeans on, but he does.  He is in good shape, so you know he has been to the gym before and knows that his wranglers could damage the equipment and are thus against the rules.  I do not know if wearing jeans to the gym is a bad-ass move, but to me he just looks like a moron.  I want more than anything for the huge steroid guy wearing American flag work-out pants to tell this guy that he can not wear jeans into they gym anymore and end the situation.
Beer of the Week
Murphy's Stout 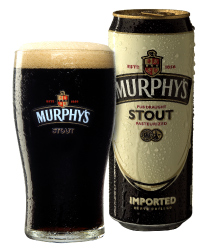 As you all know I love beer.  I love all kinds of beer for the most part, but one type I have never acquired a taste for is the draught-style stout.  Guinness is the most popular of these and I have long said that I hate Guinness.  After years of sticking to my guns, I have recently decided it is time to give Guinness another go.  After all what kind of beer drinker does not like Guinness?  I decided that before trying Guinness again, I would try a similar beer and came across this beauty.
I have long been a fan of Murphy's Red and I now love the Stout just as much.  This stout has a rich enough taste but is not necessarily a sipper.  The 16 oz. can goes down smooth and after feeling the nitrous ball roll to my lips, I know it is time for another.  I may have to put trying Guinness on hold until I have a few more of these 4 packs (which only cost me $6.99)
Posted by Eric Proctor at 10:37 AM