Apparently dad is planning to write a novel (you will want to read about his "progress" to understand my suggestions) in the hopes of obtaining a financial windfall.  I think he is going to have to explain to me, again, why this is a sound idea but playing the Powerball is not. Anyway, being the supportive daughter that I am, I decided to give him a few pointers for developing and writing a riveting story.

First off, he is going to question my literary credentials because I am two years old.  Well, let me put this in perspective.  Every night I get to select five books to read in my tent before I go to bed.  On the other hand, dad received a book he was really excited about as a gift last May that he has read about a quarter of.  Obviously, at the very least, I can remind him of a few main ideas.

Every Curious George book begins by telling you that George is a good little monkey and is very curious.  In one sentence the reader learns an immense amount of information about George that better helps them understand the predicaments his innocent curiosity get him into.  Without developing George as a character, the reader may believe him to be a nefarious actor or possibly even confuse him with the Man with the Yellow Hat.

Contrast this with "Ted".  As of right now the plan is for Ted to have a favorite band and from that the reader is supposed to understand why he does what he does and is who he is.  Why is Ted vacationing in Paris...because his favorite band is Rage Against the Machine?  That does not work.  A good development sentence would be "Ted is a fairly well-behaved man in his mid-thirties who occasionally struggles in social situations."

In Curious George and the Pizza the reader is presented with two events that signal the central theme and eventual climax of the story.  First, Tony (the pizza maker) receives an order from a nearby factory that is about to close.  Then George tries to make his own pizza but ends up upsetting many of Tony's customers.  From this the reader knows that something is going to interfere with the pizza delivery and that George is going to need to rectify himself in Tony's eyes.  At the risk of spoiling the end, I will stop here, but you get the point.

Now in dad's story, we could use a couple triggering events to understand why Ted wants to vacation in Paris. (Isn't it pathetic that this is basically all we know about dad's upcoming "novel" so far?)  Maybe he has a grandmother that always wanted to go to Paris but passes away before she can.  This would be incredibly sad, but who knows if dad is planning on taking a dark turn.  Or maybe he bought tickets for him and a girlfriend but she dumps him for his best friend before they can both go.  Well, I guess that is sad too.  Hopefully dad can come up with something better.

Stop screwing around and write word number one of the first sentence.

Do you think Margaret & H.A. Rey were plopped on the couch watching basketball in the evenings?  Better yet, do you think they were wasting time writing about writing something else?  No.  They were writing and illustrating.  Oh yeah, dad, you should learn to draw too.  Books with pictures are better. 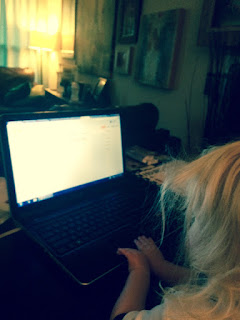 Crosby Jane Proctor is a two year old and a frequent contributing blogger to www.proctorstype.com