As discussed in the first part of my Baseball blog, part two will be about what teams I cheer for.  I should say that I will be speaking primarily of Major League Baseball teams I cheer for.  When it comes to college ball I obviously cheer for my University of Louisville Cardinals.  The Cards have established themselves as a perennial top 25 team and play an exciting brand of baseball in beautiful Jim Patterson Stadium.  They also sell dollar beers on Friday (bonus). 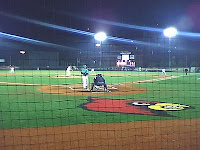 As mentioned previously in this blog, growing up in Louisville (where there aren't any professional teams), picking teams to cheer for is an interesting process.  Its not as easy as "I live in Boston, I cheer for the Red Sox" or something to that effect.  One advantage is Louisville residents aren't confined to cheering for a certain team or even just one team for that matter.  Over time I have had three teams I have cheered for and still support them all.  Now before you go and question my "fanhood" or something ridiculous like that, please read the story behind each:
The Chicago Cubs
When I was growing up our cable service had two "super-stations", WGN who showed Cubs and White Sox games and TBS who showed Braves games.  This made for a lot of Cubs and Braves fans here locally.  No one liked the White Sox (no explanation needed).  At the time the Braves were dominating the National League and they had a young Chipper Jones who all the girls (and some of the guys) thought was "cute".  I guess Chipper wasn't my Dad's type because he is a huge Cubs fan.  On top of that, my dad is strictly a Cubs fan, he knows the Cub's entire roster but wouldn't know Hanley Ramirez if he walked up and said "Hi, I'm Hanley".
Its natural to like the same team as your dad and I did just that.  The Cubs were on TV all the time, they had Sammy Sosa, and of course Harry Caray.  There is only one problem....the Cubs aren't very good.  Sure they've had their moments (2003, 2008) and their big signings (Nomar, Soriano) but all in all they are the "lovable losers".  I can't say that "lovable losers" and Proctor's Type go hand in hand.  Despite this, I still cheer for the Cubs  and I know that one day they will finally win that World Series that has eluded them for so, so long.  And when that moment comes I want to be there watching with my father who has been faithful to the Cubs for all of these years.  Last thought on the Cubs....they are grown men who are called THE CUBS, what can you really expect?

It is often said of the Yankees that you either love the Yankees or you hate them.  For years I just assumed I was someone who hated them but I slowly started to question why I would hate the Yankees.  Did I hate that they do anything to win?  Did I hate that they are never content with second place?  Did I hate them because they make more money than anyone else and use that extra money to pay the best free agents?  Did I hate them because they have had much more success than any other Major League team in the history of baseball?  This doesn't sound like a team I would hate...this sounds like Proctor's Type!
The Yankees don't talk a lot.  The Yankees don't cheat.  The Yankees don't hoard money.  The Yankees go out and do everything in their power to win the World Series every single year and if they don't win it, they did not meet their goal.  How could I hate something I respect so much?  I may not have the emotional connection with the Yankees that I have with the Cubs or the Tigers, but I certainly respect them and more often than not I'll be hoping they bring home yet another championship.
The Detroit Tigers

It seems like everything that is associated with my beautiful fiancée Laura turns to gold for me.  I have new family members I love and have made lifelong friends in just a few trips to Michigan.  Along with my personal relationships, I have built new team relationships.  There were always some Tiger's players that I liked but I never followed the team that closely.  That has changed over the last couple of years with me becoming tight with Laura's dad and brother (both big Tigers fans).  Baseball is a great topic of conversation when you are getting to know someone and the Tigers ensure we won't run out of discussion topics.
My liking the Tigers turned to love after a fantastic trip to beautiful Comerica Park last summer.  Laura and I joined our friends Ryan and Lindsay to see the Tigers beat the Mariners (Ichiro!!). Seeing the statues of Ty Cobb, Hank Greenberg, Al Kaline and some large Tigers in Comerica Park was special and I won't forget my first trip there.
Lets put it this way....If everything goes as planned I will have my 3'x5' Tigers flag on a 20 foot flag pole in the backyard within the next couple of weeks (fingers crossed).
Stay tuned for my 2011 MLB preview/predictions in part III