March Madness (with unveiling of my official bracket)

Well its that time of year: work productivity grinds to a halt, everyone tells you their "dark horse" (who they haven't seen play a minute of basketball all year)  and some ass takes a couple minutes of your valuable bracket filling out time to tell you why they "really don't see the point" (shut up!).  March Madness is upon us.  Think about how many people have told you they love this time of the year...and add one more.
I LOVE THIS TIME OF THE YEAR!
The large type and the use of the "bold" prove that I love it even more than those other people.  Therefore it should be obvious that I add my analysis, see what teams are Proctor's Type and unveil my official bracket in the most anticipated blog entry of Proctor's Type young life. 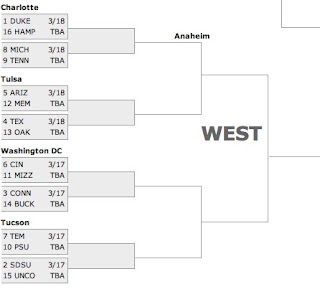 Unlike every other analyzer, I will start with the West Bracket (take that Bilas!).

It goes without saying that every year Duke haters say that they get the "easiest" road to the Final 4 and Duke fans say the exact opposite. I am not a fan of ever saying anyone ever has an easy road to the Final Four.  The day I see Duke as a one seed and a collection of middle school and retirement home teams as the 2-16, I may reconsider.  There is a ton of talent in this region and I don't see Duke having a cake walk at all.

Along with my predictions, I will throw in a few spins on classic analyst topics. Without further ado.... 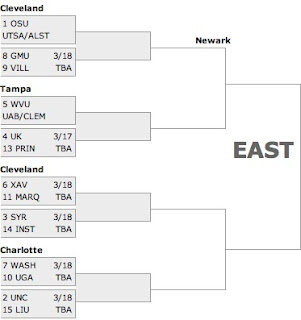 Now we move onto the East.  It should be noted that the University of Kentucky is the 4 seed in this region, which brings me to the subject of bias.  As a die-hard University of Louisville fan, I can pretty much say that I am not a fan  of U of K...AT ALL.  I will do my best to accentuate their flaws and diminish their accomplishments, its simply in my nature.  To counteract my obvious bias, I will be italicizing any biased statements either in support of U of L or against U of K.

Example:  U of K will never win a championship with a roster full of one and done Freshman and even if they did, the title would almost assuredly be vacated due to recruiting violations. 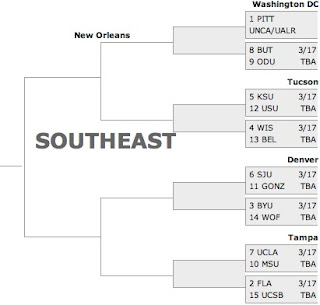 This region does have the honor of having the most crappy seeding within it.  Florida may be the least deserving 2 seed in the history of the tournament and I really want someone to explain to me what Michigan State's record would have to have been to not make the tournament?  I know they are good and have a great coach.... but they are 19-14 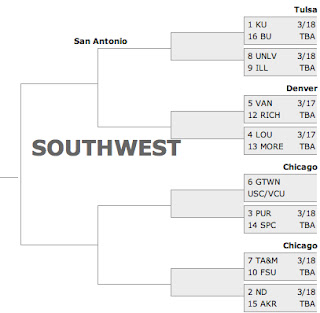 The Southwest region houses my Cardinals.  For more on how special I think this team is please refer to a Proctor's Type blog entry titled "I Love this Team".  Since writing that entry the Cardinals won a thrilling over time game over the Irish of Notre Dame in the Big East semi-finals.  The Irish have the 15 seeded Akron Zips in the first round, which leads me to my intriguing thought....
If Akron was allowed to add LeBron James (valued reader) for the tournament what odds would you give them of winning?  I would say they would coast to the championship winning every game by double digits.  Why do I waste my time thinking about things like this?  I can't really tell you, but I can tell you it would be awesome to watch LeBron dunk on the entire Notre Dame team one by one.  Kinda like this but with LeBron:

Sweet Sixteen: Kansas beats UNLV, Louisville beats Richmond, Purdue beats Georgetown, Notre Dame beats Texas A and M
Elite Eight: Louisville beats Kansas, Purdue beats Notre Dame
Final Four Representative: Purdue
Over-hyped Team Least Likely to make a surprise run: Vanderbilt
Best Player You've Probably Heard Of: Ben Hansbrough
The "Who Gives a Shit" Game: Texas A and M vs. Florida State
Upset everyone is predicting that won't happen:  USC beating Georgetown
Predictable Fan Excuse:  "Buckles would have helped us SO MUCH on the boards" (me, Louisville)
In the final four I will take Pitt to beat Purdue and Ohio State to edge UConn.
And your 2011 NCAA Men's Division One (is it still called this?) College Basketball Champion will be:
If you think my bracket sucks and you can undoubtedly beat it, feel free to join my ESPN Bracket Challenge Group: http://games.espn.go.com/tcmen/en/group?groupID=54588&entryID=705036
Password: Kuric
Good Luck
Posted by Eric Proctor at 6:01 PM